Day 382. in which leroy c. cornell is identified?

January 18, 2009
Often Dad's reality is mismatched from the moment actually transpiring to a moment from long ago. In addition to the Alzheimer's diagnosis, Dad has recently been plagued with pneumonia, and other random viruses passed along to him from his goobie grandchildren who are laden with germs so he's been more confused than usual.

Sometimes it seems like my father is already gone.

In truth, he cannot do any of the things he once loved to do. He spends most of his time on a couch in a living room, and cannot find his way back to the living room once he wanders out of it. Attempts at dialogue are a challenge. Dad talks with me like his words are making sense but more often than not, they are not.

And other days, he cannot talk at all.

I recently began scanning Dad's old photographs. One of my regrets is that my father kept some mementos and photographs but that their story could be 'die' with him. Most of his photographs are not notated and while some of them I am able to piece together, the history of others are lost entirely.

[left: an unidentified couple from manila? friends of bob?]

A few days ago, I wouldn't have even tried to ask Dad about his photographs. He was really struggling to grasp his immediate reality, and I knew I wouldn't be able to trust that any answer he gave me was sensible.

But today was a good day. Though they come less and less, they still come, and it surprises me every time Dad seems to resurrect himself from wherever he's been.

So, I tackled his Air Force photo album, scanning a handful of pictures. There was one man in several of them so I showed this picture (below) to Dad and asked him if he knew who they were? 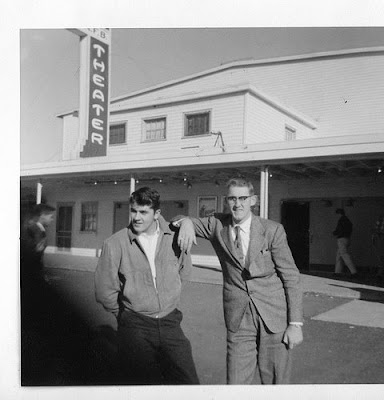 He has no idea who his two grandchildren are that he has lived with for nearly three years, but he could still identify Leroy Cornell! Not just Leroy Cornell, but Leroy C. Cornell!

He came into my bedroom the other morning, and stood at the foot of my bed.

I just need a time machine to get him back.