Day 421. in which you might not want to respond to your mother's beck and call.

March 06, 2009
Bob's most quiet time of the day is the morning. While words often escape him in the evening, the morning is relatively coherent, when a dialogue is still possible. The panic does not settle into Dad's eyes until the sun begins to set on the day. This morning, his head was resting on the back of the couch, and his eyes were closed. He was quiet.

The couch pillows were arranged so that the ones which were supposed to go behind him were instead piled up on top of him. He clutched the over-sized pillow close to his body, hugging it tightly to his chest. Only his glasses peeked out over the top, the rest of his face hidden by the pillow. Dana and I were sitting on the other side of the room on the love seat, engrossed by our digital devices. The morning show was droning on in the background but none of us were minding it. The children had already been shuffled off to school so the house was unusually peaceful.

With his eyes still closed, Bob said dreamily, "When I close my eyes, it's amazing how clear the picture of my mother is." 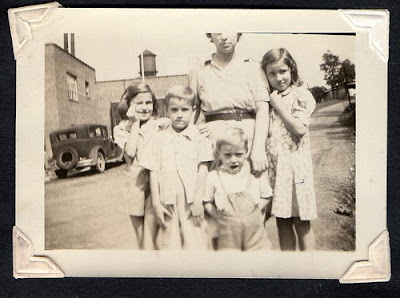 my father's mother, Ivy Regina Mark Brown, with her children, standing near the paper mill in Rossman, NY, which my grandfather, Roy Jesse Brown, oversaw. Ham Turner owned the mill at this time.
And then, he was quiet again.

Dad opened his eyes and popped up his head quickly. He looked across the room at me, as if he were surprised to find someone else in the room with him.

"Well...Is your mother waving you to her, or away from her?"

"Is she making an angry face? Or a happy face?" Dana asked.

"Yeah, Dad, it really all depends on how she is looking at you," I smiled at him.

I'm not quite certain if he understood what I was getting at, but he gave me that look like, 'I'll get you yet, kid', and he laughed.

I miss that look. It's one I remember getting a lot before my father developed Alzheimer's.

It feels good to know I can still hassle my dear old Dad.