Day 478. in which signs are only good if you know where you are.

May 04, 2009
And clearly, I didn't. When I look back at when my father first moved in with me, I cringe. I expected more from him than he was capable. He had only recently stopped driving (a blog, for another time...). He had been home most of the time alone, sometimes for days, nights, while his partner was away at work. I wonder now what those days and nights passed alone were like for him. At first, I thought he was OK to leave home alone; he simply needed visual cues. 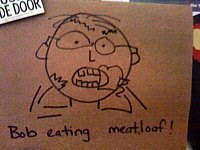 This one served as a reminder to Bob to eat lunch while I was at work.
I littered the house with pointers. Nothing fancy. Simply Sharpee-scribbled reminders of who he was, 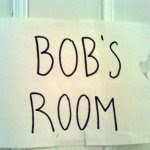 what to do, and where to go on colored construction paper.
Bob's Room.
Bathroom.
STOP! Bob! Stay inside the house!
Attic.
Stupidly, at first, I sometimes left him in the house with notes in 'joke' format, like 'Hey Bob, don't leave the house! The police are looking for you!" which would have been really funny if my father didn't have Alzheimer's. It was the type of smart ass note I would have left him as a teenager. I didn't think twice about it, until he called me on the phone at my office, terrified that he had done something, but could not remember what? Now the police were looking for him...
Shortly thereafter, I lost him. He made it all the way from Kingston, passed through Rosendale, and ended up in Bloomington. Apparently, Dad's determination to drink had not despaired. He was trying to buy a beer at a low-end strip joint, but had no money in his pockets. The bar called him a taxi. Of course, Dad didn't know where he lived; he couldn't even pinpoint the correct county, let alone the town, the street, or even our house. And of course, everything looked familiar to Dad in a fuzzy sort of way that must make everything seem like déjà vu - this seems right, but something is off...
So the taxi driver drove him up and down streets, stopping in front of one house, pausing in front of another, patiently trying to help my Dad find his house. An hour later, the taxi driver, despite my father begging and pleading with him not to, brought him to the police station, where I had already reported him missing hours earlier. When the phone rang that evening, I jumped on it.
"Is this Alex Brown?" asked an officer.
I felt instantly nauseous, awaiting an update about Dad with bated breathe. My eyes were closed, as if that could prevent the delivery of bad news from being heard.

We found your father. He's here now. So is the taxi he's been riding around in - the taxi driver is waiting here. You owe him $22.50.

I'd like to say that I've never lost my father again. But I have. More than once, Bob has walked out the door, never intending to leave but becoming easily distracted by whatever passes in front of his eyes.
Before he moved in with me, he used to wander about all day, often riding his bicycle from Cambridge over the border to Vermont and back. This was until he ran out of bicycles to leave behind someplace other, someplace he couldn't return to.
I wasn't entirely clueless in regards to Alzheimer's. But what I didn't quite get, however, is just how far my father had already progressed. Because, in truth, my father had always been a bit eccentric. He'd always been a wanderer, had always littered the house with reminders. Even my brother thought a lot of his memory issues were his way of joking with us; he didn't believe they were real. 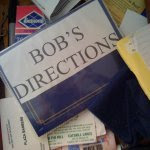 Indeed, Dad had developed some savvy tricks when his memory started to fade. It seems to me that Dad always utilized such tricks, and that his memory problems had emerged many years prior to any formal diagnosis. Even his neurologist insisted for a long time, perhaps because Dad was so young, that he simply had an attention problem that made it difficult for him to follow directions. If he could only focus, he wouldn't be so forgetful; his absent-minded nature was some form of attention deficit. In retrospect, I wonder if even his love of maps were because of issues with his ever-degrading memory. When he moved in, he came with little more than his clothing - and two large XEROX boxes of maps. 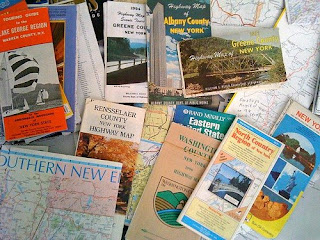 Bob's Maps.
The night Dad came downstairs to tell me he had just talked to Jesus in our attic who told Dad he couldn't sleep in his bedroom, I had to take a step back and realize this was not the Dad that told me to eat my vegetables and brush my teeth. I was no longer the daughter who dutifully would acquiesce to his commands—even if I wanted to be. It was like losing Dad without losing him. Physically, he was the same person. But where was Bob? What made him 'Bob'? What version of 'Bob' was he? All of my knowledge of metaphysics had to be reexamined, reprocessed to reconcile Bob with the universe.
We never had the opportunity to discuss the diagnosis in a way that was meaningful. By the time the neurologist agreed that he did, indeed, have Alzheimer's Disease, it was too late to discuss. He wouldn't talk about it. He was belligerent about it. He didn't have Alzheimer's. He didn't need to discuss it.
He had maps. He knew how to read maps.
Unfortunately, maps are only useful if you know where you are.
If you have no point of reference, you may as well not have a map.
Dad left the house long before he moved into mine. I hadn't even realized he was gone until after he had left. And not even the best map can point him back from where he came.