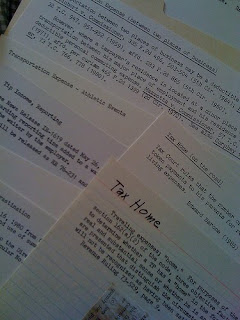 My father is 70 years old. What he owns can fit into a small bedroom.

There are hundreds of business cards, wrapped up with rubber bands; soaps and shampoos, collected from motels; beer coasters he habitually nabbed from bars; a large Xerox box full of maps; a variety of adhesive he used during his sock-gluing phase, among a variety of other odds and ends that had somehow called to him. In all of these items, I am aware of something intrinsically 'Bob' in all of them. To an outsider, they would signify little.

But what stands out the most in this room is an object lately untouched by Bob: a plain hard-covered, black brief case. The brief case that carried back and forth various documents from the Federal building in Albany, the mysterious case I was not to touch on pain of death. I recall it being a source of mystery for me. What could be so very important in that black brief case...?

The brief case left me deflated. At the end of the day, is that all there is..?

Now here I was, alone, with Bob's brief case. I opened it and in my mind, I could see Bob opening it. Bob, still living, felt gone. Here I was, packing up his room, organizing his items, like he was dead. Alzheimer's disease takes away more than memories; it takes a way a family's ability to mourn. Bob is still here, but is gone, at the same time. How can this be?

I shuffled through the papers in his briefcase - most of them had long ago lost any significance but were safely stored away. The typed up IRS tax codes on over-sized index cards struck me as being very 'Bob' but weren't satisfying. I wanted there to be more.

Rummaging through, paper by paper, one type written paper struck me. It was a letter Bob had written from Great Falls, Montana, a month before my birth, to his family back home in New York.

No doubt you have all been wondering if I made it back alive from the outer limities of the great State of Montana. Well, I did, but I had to get a piston replaced on our Maverick before the trip was over. That necessitated taking a bus to the next town for my audit appointments and coming back 3 days later to get my car. Which meant that I had the joyous opportunity to ride on the Missouri Valley Bus Lines, an experience not to be forgotten. If you wonder what happens to old school buses in N.Y.S, they're sent to Montana for use as commercial buses. Greyhound does serve this area, but it only stops at towns with traffic lights. Coming back to get my car on Saturday, the bus broke down before it got to Glasgow and I had to ride in a Ford Galaxie station wagon with 3 drunk Indians, 2 old fat women, and the driver with at least 1000+ pounds of cargo. I was considering taking up praying again before I got out of that thing. Fortunately, the repairs came to only $140.00 (I was expecting $240.00).

It was the most miserable two weeks on the road that I've spent yet. I'm not on the road this month, because I think that Bunny and the doctor are both wrong about the baby being due on November 23 - I think it'll be October 23, the way Bunny looks. I've given Bobby instructions to keep sharp objects away from his mother.

We considered buying a trailer to live in, but decided not to. The way the dealer talked it sounded like a good thing, but since I have developed an aversion to signing my name on contracts that I have to pay for, I did some checking. After finding out what all I had to pay besides the trailer payment and parking space rent, I was sick. Fortunately, I hadn't signed anything. We'll be renting a hell of a long time unless interest rates go down. 11.69% interest? That's robbery.

Is your car still running? Mine is, but it needs work on the ball joints which burns me up since it has only 26,000 miles on it. Apparently, neither the dealer who sold it to me or the dealer in Great Falls who serviced it a few times before I found a decent service station, bothered to grease it or tell me that you can't grease the ball joints on a Ford now. You can only replace them. Lovely.

I went to see a E.E.N.T. specialist this past week. The doctor I was going to sent me after he finally decided that he couldn't do anymore. I've been having this damned sinus drainage which runins (that's "ruins") my sleep. The specialist said I had a beautiful nose structure (whatever turns you on, I guess.) and in his opinion I probably have an allergy to something. So now I take some more of the same pills and then I call him and next I proably (that's probably) go to an allergist.

So, we are going to paint our apartment and maybe buy a rocking chair and stay put for awhile. But, if I can get transferred back to the East, that's what I'm going to do. We may or may not be home for Christmas. Have to wait to see how everything goes. "East" to a Montanan is anything east of Billings.

Bunny had hysterics the other day when for the first time in 3 months I bought her a cup of coffee in a restaurant and some cowboy asked the cashier why he didn't have a fingerbowl like all the restaurants in New York are required to have. Now I know what these characters are who stick their fingers in your water glasses. They're not tough guys - they're Montana cowboys.

I'm sorry to hear that Genevive and Carl and family were all killed or had their arms broken in accidents. I won't be expecting any more letters from them. Did you get that, Genny?

It's Sunday morning and I have work to do so I will end this and you can all write sometime. I have to set up some taxpayers for collection.