December 25, 2008
My father had systems that baffled me for years. I didn't understand them, and often what we don't understand, we tend to mock. It was much easier to poke fun of his enigmatic reminders and notes scattered over every inch of our home than it was for me to try and understand why there were notes.
Sometimes, I feel angry that he never discussed his memory problems with me until we could no longer have a dialogue about them. Feeling somewhat frustrated, I asked him the other day, fruitlessly, "Why didn't you ever talk to me about your memory problems?"
And he looked at me with this pleading look of confusion,

I never knew that I had a memory problem!

Whose fault is it that we never had a discussion about this? Is it his, or is it really mine?
When I was younger, it was easy to make jokes about it. One Christmas, when I was in my early 20's, I bought him a book on how to improve his memory as a joke. I thought it was funny. I don't think it is so funny now. And apparently, the book wasn't very useful, either...
Then, when the issues became more tangible, I stopped the dialogue entirely. I knew that it caused him embarrassment so I avoided it. Instead of discussing it together, we ignored it together.
Later, I took to helping him hide it - not just memory issues, but lapses in judgment. About eight years ago, before my father came to live with me, my father was living in Valatie in Columbia County with his partner, Barbara. They lived on Maple Lane North, coincidentally right between where my father and I previously shared an apartment and where I had my first job washing dishes at St Joseph's Retreat as a teen. Going to visit Barbara and Dad there felt like going home even though I had never lived there. Their little house was set back in from the road, spaced well apart between two other houses, and behind their house nothing but endless fields of Columbia County corn.
My father enjoyed setting things on fire. Not random things. Paper garbage, mostly. He had a burn barrel which is both illegal and surprisingly common in Columbia County. He liked to burn paper, brush that had fallen from trees - that sort of thing. It seemed mostly harmless.
At this point, I'd like to remind you that we didn't know he had Alzheimer's Disease. He seemed eccentric and forgetful - but these were two characteristics that had forever been 'Bob'.
My father called me frequently around this time when he was home alone. He was drinking a lot of wine, and honestly, this didn't concern me, either. He had always been a drinker, and he was sitting safely at home with his box of wine, so no harm. He'd call me on the phone a lot then, giving me play by plays of what was on every television channel as he clicked through with a remote control. I found it a bit tiresome at times, and I admit to not always answering Dad's calls when he called on the phone. He thought this play-by-play was very funny, and often cracked himself up. I would shake my head at Dana as I listened to my father ramble on about whatever, chalking it up to drinking too much.
During our phone conversations, Dad often expressed to me that he was afraid Barbara was going to kick him out of the house, that she was angry with him, and he didn't think it would be long before she threw him. In retrospect, I don't believe Barbara ever intended to do any such thing. The fear for Dad was nonetheless real - and because I loved Barbara dearly, his fear became my fear, too. They had been together all of my adult life, and the thought of them breaking up caused me great distress. I enjoyed having a mother/father family, of which I had not had as a child, and did not want to lose it anymore than Dad did.
I know now that my father's sense of Barbara's anger was (mostly) entirely imagined because he has since displaced the same fears he had with her onto me. Even though the reality is that he cannot help the issues with his memory, it is still difficult - and I'm certain at the beginning, it was even more frustrating for Barbara because it perhaps seemed like he was either being stupid, lazy, or both. Barbara would come home from working a long shift, and find Dad had not done anything around the house. In fact, quite the opposite was true - the house would often be torn apart, objects misplaced and rearranged. Indeed, Barbara was frustrated with him but I do not believe she was ever on the cusp of 'kicking him out'.
He would sometimes call me, sounding sad and agitated, asking me if he could come stay with me for awhile, if Barbara kicked him out.
So, Dad's fears became our shared fears. Unfortunately, we were both needlessly worried about the wrong thing.
One Memorial Day weekend, the whole family - me, Dana, Seth, my brother, Rob, his wife, Christine, Barbara's daughter and my life-long friend, Stephanie, and her husband, Dan - all of us had gathered on Maple Lane. Dad was noticeably anxious and kept wandering out of the house into the back yard. He was tending to various chores outside, near the back door of the garage, rummaging around. He always had the appearance of being very busy though the end results rarely suggested this. I was washing dishes at the kitchen sink. The sink was positioned underneath the window that overlooked the back yard and I could see Dad quickly making repeated trips with a large bucket from the back of the house, across the long yard, back to the edge of the property where the corn field began. Back and forth, he carried a bucket, looking harried. Sometimes, he would stop in the middle of the yard, distracted by something I could not tell what. Barbara walked into the kitchen behind me.
"What is he doing out there..?" I asked.
"Oh, I don't know. He's been doing that," she responded, not particularly curious.
I finished up the dishes but I couldn't keep my eyes off of him. In the front yard, the family was gathered for a game of croquet but I wandered out to the back yard to see what Dad was doing. I came up behind him as he was filling up his bucket on the tap on the backside of the house.

What are you doing?

Dad jumped up suddenly. I hadn't meant to surprise him. He turned on me quickly with a frantic look in his eyes.

Look. You have to help me. I'm going to tell you something, but you can't tell anyone about this, OK?

"Especially Barbara... Barbara is going to kill me. If she finds out, she's going to kick me out!"

He ordered me to follow him and we headed out towards the back yard with the bucket full of water.

When anyone starts a dialogue with the words "I'm going to tell you something but you can't tell anyone...", it's a sure sign that you should tell someone.
But he is my father and I'm his daughter.
And so I obeyed.
Dad glanced over his shoulder, more than once, in the direction of the house. When we were safely out of earshot, he started, "There was a fire yesterday..." He brought me to the edge of the property, where the corn began in the back and bordered the neighbor's yard, beneath their tall oak. The ground, in the midst of greenery, was black and smoldering.

Oh my God! What happened?

"I was burning some brush out back here yesterday. The whole damned fire department showed up! They yelled at me about not having a permit, and then the neighbor got in on it, too! I've always burned brush!"
The weather had been dry so the ground - and grass- was dry. Not a good time for a scheduled brush fire.
"What the hell were you thinking?" I asked him.

It was not like me to talk to Dad like this but it just didn't seem like something Dad would do. Dad was eccentric, but not prone to making poor judgment calls.

"Not now, OK? You have to help me. I need to get buckets of water out here to keep it from starting up again and I need you to keep Barbara out of the way.

"She doesn't know...? Dad!"
"Look. Not right now. I need your help. Will you just help me? I heard everything you're saying from the fire chief yesterday so I don't need to hear it again. Just help me," he pleaded.
I ran to the front of the house while Dad continued to run back and forth with buckets of water. The croquet game was coming to an end. I went over to Dana and whispered in his ear, "Keep everyone playing croquet. Dad started a fire and I'm trying to help him... I'll explain later...just make sure you keep Barbara in the front yard!"
Without question and without a bat of the eye, Dana complied and challenged the players to a new game. I excused myself, went into the front door, through the kitchen, into the garage and out the back door to Dad. Dad was standing out back by the smoldering ground, staring down at it. I took the bucket from him and began running buckets as quickly as I could. The back yard was mostly clear of trees so that I was conspicuous to anyone who may be observing - the primary reason to keep everyone playing croquet in the front.
I'm not sure how long we kept this up. Later in the evening, we had a barbecue and stood around near the front near the yard by the driveway. Occasionally, either I or Dad would sneak away to make certain the fire stayed out. That night was a long night. It was difficult to sneak out after dark without detection because the house - as well as the Columbia County countryside - was so still and quiet. We had saturated the ground but it must have been a fine fire the day before because the ground would not stop smoldering.
Dana and I laid in the bed of the guest room, each of us staring at the ceiling, unable to sleep, saying nothing, listening to the still house.
He asked me quietly, "Do you think she's going to kick him out?"
"I don't know," I answered honestly.
Sometime after midnight, I heard the sound of rain hitting the roof and though I am not a religious person, I am certain I thanked God that night.
The fire had simmered out slowly until it was extinguished.
And I hadn't really helped at all. 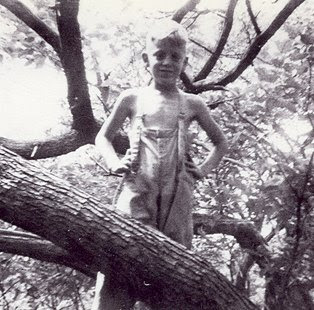