May 14, 2010
Last night, I found myself planted on the couch in my living room with a gummi worm hanging out of the side of my mouth. I wondered just how long before one of my little hell monkeys would wander by and notice?
As a child, I maintained the false belief, as I suspect many children do, that my father was an infallible, rational being. Therefore, everything he said must be universally true and right.

Now that I'm a parent, I realize how fallacious this belief was. I'm taller. I pay taxes. I've evolved but I'm still the same weird kid on the inside that I've always been.

As I grew older, the world unveiled realities outside of my own microcosm and what this world reflected was that my own was more than a bit askew. My father had a lot of eccentricities that I never thought twice about until many years later.

The ride home was quiet and still, highlighted by Bob's humming. It wasn't many years later that I learned 'Starry, Starry Night' was a real song. He would sing, over and over again, only the words "Starry, Starry Night" before launching into a humming of the chorus. Only on rare occasions were we allowed to play the radio in the car. Bob considered it an unnecessary distraction.

Riding home was a time for quiet reflection.

Returning home from an evening out, my family would wait in the car, my father instructing us to wait for the 'all clear'. We waited. In the cold, the car, this tick, tick, tick of an engine... No crickets. No humming. No speaking. Deafening silence of a winter’s night in Columbia County.

We weren't allowed to enter the house until Bob had completed a full inspection. We sat, in the dark of the car, patiently waiting for Bob to send back an indication that the house was safe and empty.

What my father actually did on the inside of the house, I never really knew, since I was always on the outside, waiting, but I can imagine him looking underneath each bed, opening all of the closets and cupboards, lest someone (something?) be hiding within.

There was never a time when Bob didn’t signal the ‘all-clear’. I don’t recall him ever giving us an escape plan. I wonder now how long I would have waited outside in the car under the dark of night?

After the house was thoroughly inspected and deemed safe by my father, a light would flicker on and off several times in a methodic fashion to signal the 'all clear'. 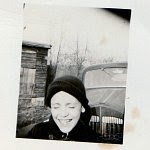 So, why would Bob do this?

Recently, my Aunt Barbara, who is married to my father's elder brother, Leo, relayed a story about one of the first times she went to visit Leo at his mother's home. She learned quickly that the Brown household suffered some idiosyncrasies.

Leo Brown: Then she [Ivy Brown] went from Cohoes to Cobleskill...she went to East Street. You [Bob] lived there, too. I don’t remember the house number. She was there a couple years. That’s the famous weekend when Barbara was staying with us and someone come and knocked on the front door.

Barbara Brown: We were all in the dining room and there was a knock on the front door and I suddenly found myself all alone. They were gone! Upstairs! In the other rooms! Why? Because that’s what you Browns all did. Every time. They all disappeared. I’d go to the door. I mean, Ivy, everyone, was gone.

Perhaps because of Bob’s quirks, it took longer for us to recognize symptoms of Alzheimer’s. Bob was quirky, Bob was eccentric. Nothing odd at all about gluing socks, we didn't blink an eye.