September 03, 2008
I was standing at the sink washing dishes when Dad made his first round down the hall to the kitchen from the living room. He seemed a bit anxious but the day had been a long one so I didn't think much of it. It would be time for bed soon.

As always, he stopped by the sink in his circular trip through the house. Typically, he comments on what a great job I'm doing washing the dishes but today, he said something I thought a bit unusual.

I paused. Dad has long ago forgotten how to use a computer and to reference a blog in any universe is new knowledge. He has heard me mention the word before, and seems fascinated by it; he always demands to know what a 'blog' is when he hears the word referenced. However, he never pulls it out of nowhere. It's always in connection to something he has just heard.

And no one in the house was talking about blogs at the moment.

He didn't look so sure of this. He looked very worried. "Well, O.K...so you don't need me to do anything with the blog, then?"

"Nope! I've got the blogs all under control."

"Go have a seat in the living room. I'll be there when I'm finished."

"Where is the living room?" he asked.

I pointed the way to the living room through the dining room, as I had hundreds of times before, and returned to washing the dishes.

Less than a minute later, Dad had come full circle, back to the kitchen, standing sentry by the kitchen sink.

I sighed. I was a bit exasperated because it had been such a long day and I really needed a moment to unwind - sadly, doing dishes is my 'unwinding' time quite often!

"Yes, Dad, I'm certain it's alright. Just go have a seat in the living room. I promise I'll come sit with you as soon as I'm done with the dishes."

"Well, O.K. then, I was just trying to help..." and he wandered off again, still seeming a bit anxious.

I finished up the dishes and walked into the living room. I noticed my laptop had been moved from the arm of the couch - probably not the safest place to leave it, but I knew it would be safe from children and Bobs sitting on it there.

But now my laptop was sitting on the couch beneath a large pile of couch pillows. I couldn't see the laptop itself - just the cord winding its way out to the outlet from some abyss beneath the pile of pillows.

Wrong word, right concept...Dad likely had seen my laptop left in what he considered to be a precarious position and tried to 'fix' it by safeguarding it with pillows. He had tried to tell me but I hadn't been really listening.

What else can Bob tell us? Probably quite a lot if we listen in the right way. 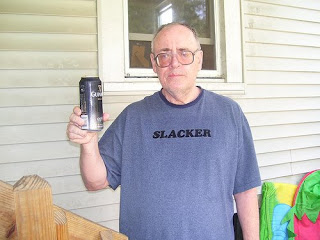