Day 257. in which Ford doesn't respond to pep talks and antifreeze.

I'm not a spontaneous person. I'm sorry if that doesn't make me much fun, but I grew up with my father, and if you know my father, you know that spontaneity not only did not come to him; it angered him. He always said that if he had ever been given a surprise party, he would have turned right around and walked back out the door in the other direction.

He said that anytime in his life there had ever been a surprise, it had been a bad one. Never a good one. Boredom was a 'good'; it meant that nothing bad was happening to you.

Every moment was planned. We didn't do anything without discussing it, planning it. Sometimes he wouldn't even answer the door when my Uncle Bill would stop by unannounced - because he hadn't called us first. Of course, had Uncle Bill called, Dad would have told him not to come...

The one time I was given a surprise party, I was in a depressed slump over having a birthday and I hadn't even showered that day. Looking pretty gross and smelling somewhat rotten, I was greeted by my best friends and family.

although that in itself is a nightmare. There are 6 of us in total - Dana driving up front with Grandpa Bob, Liam and Lilith in the back seat with me squished in between 2 car seats, and Seth seated illegally in the back hatch of our 2003 Ford Focus. I can't shake the image of the family from Little Miss Sunshine chasing after their car every time I see Seth falling out of the back of our Ford Focus.

So we started mentally planning our trip to Dana's sister's house about a month ago.

Yesterday morning, I woke up with the plan in my mind that I was going to Tracy's house for a party. I knew what had to be done before we could leave and it was with this in mind that I went about my morning which led to an argument with Dana when he said that the party was not Saturday - it was Sunday. I argued with Dana about it. It had to be today! I was planning on going to a party today!

I had to eat crow over that one.

So, this morning, I got up. I ingested a pot of coffee and did it all over again. I dressed Liam, and redressed Liam, after he ate some cereal. I dressed Lilith, and made pig tails in her hair. I cleaned Dad's glasses, directed him to deodorant, and helped him with a t-shirt. Seth took a shower while I did some laundry. One, two, three...everything fell into shape.

We made it into the car, stopped for gas and oil at the Getty, and ran by the pharmacy for cookies and camera batteries. 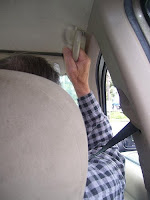 In the back of my head the whole time is that something was going to go wrong. I don't think I'm psychic; I think am always living worst-case scenario. We typically don't go in the car, all of us, further than 20 minutes because Dad starts freaking out.

I was anticipating something bad. But, in all manners of car, I am like my Dad, again. I could feel myself holding my breathe as we headed down Rt 28 towards Woodstock.

That was when there was a big puff of white smoke pour out the back tailpipe. The car made an unusual noise. I noticed the temperature guage slowly inching up. Dana and I both know that the car exists in a precarious state, but simply put - there isn't much we can do about this. Our car lives on prayers alone, confounded by middle class poverty and our infidelic state.

I began to pray we'd make it home, but I realized the futility of this. I tried not to get angry and I actually succeeded. I could imagine all too well being stuck on Rt 28 with all of the kids and Bob, and while I think that would make for an excellent blog, I rather have a boring morning in my living room.

Ah! But the party. The last time I had been to Tracy's home was when Liam was very small still. She only lives an hour away, and yet, we rarely get to see her and all of Dana's nieces and nephews. My own brother and his wife live with my new baby niece near Albany, and it's an impossible trip for us. Part of the charm of Kingston for me has always been its close proximity to both New York and Albany, but the truth is that I go there as frequently as I'd go if I lived in San Francisco.

At home, we opened the hood of the car, and stared at the insides.

Um. Yup. That was the inside of a car, alright.

Luckily, our neighbor noticed us and diagnosed the problem. There was no antifreeze in the car...

Out to 28 we headed again. We were moving along and it seemed to be going well. We went back to eating cookies in the car and idle chatter when Dana said, "Oh no...look behind us."

Plumes of white smoke cascaded out the back of the car as we chugged up the slow hill by the Hickory Pitt.

Dana turned the car around while I again prayed we'd make it home. As we chugged down Washington Avenue, I felt thankful we weren't stranded out of cell service in the hills of Belleayre with 3 kids and a Bob but disappointed we weren't going to the party (again).

I have to make it to Rotterdam (New York) for a christening in a couple of weekends. Better start planning this one now with an alternative plan for transportation.