Day 270. in which Seth is lucky he is visiting family out-of-town.

September 27, 2008
Neither Lil nor Liam have ever had a 'professional' photograph taken in a 'studio'. I currently have over 3800 pictures of my family on Flickr so I think I have it covered...

home-grown photo of liam taken by alex at forsythe park.

However, my sister-in-law, Christine, has studio photos taken frequently. She has already had photographs of my three-month-old niece, Rae, taken twice! I've never pulled it off once!

I've always been impressed with Christine's ability to both organize and execute group events. If it was not for her, my brother's visits would be no more than the two of us getting together under one roof to nap (the first hour of our visit together, the two of us spent napping).

Christine knows this. So, she scheduled the appointment at Sears and posted the details on my Facebook 'wall'. All the cousins were to get their photo taken together at Sears on Saturday at 5.

Seth narrowly escaped this event as he is visiting family out-of-town...My brother had suggested we cancel until all of the cousins were in one place, but Christine has portraits done so frequently that she countered this suggestion; we'll just do it again, soon, with Seth!

There will never, ever be a next time. But we didn't know this then.

30 minutes after our appointment was scheduled we were still waiting in the waiting area. Our photographer approached us at 5:30 not to take photographics but to hand us paperwork. Christine had scheduled the appointments on-line through her Super Saver account, an account which she has maintained for years. I wonder why many companies seem to have paperwork redundancies. They require that you fill out actual 'paper' work when the online appointment registration required the same information.

And do they really need to know the age of my children and their names? What if I don't want to give you that? What do you intend to do with this information?

I honestly probably would not have balked at this redundancy if they had given us the paperwork when we first checked in with them. However, they didn't.

For those of you who have had to entertain a child in a waiting room before, I am certain you will be empathetic. 30 minutes with 1 pre-teen, 1 3-year-old, 1 almost 2-year-old, and 1 3-month old. In defense of the kids, they were actually well-behaved, considering...

But I really wonder at a portrait studio geared towards family photos that makes you wait 30 minutes with 4 kids after your appointment is scheduled, and then hands you paperwork to fill out...

We bring the kids into a cube of a room with little room to negotiate each other, let alone the camera, flash, and shelves of props. Across the hall in a more spacious room is a teenager there for her senior yearbook picture. It's ungodly hot. They have a fan going in the main room but it's ineffective.

The photographer was ready to take photographs. She took a couple but then couldn't get the camera to move 'up' or 'down' the camera pole. She left us awhile with the kids half-posed while she ran out of a room to find a customer to help her move the equipment.

Sears advertises a variety of backgrounds. In reality, all I saw was this white backdrop. The kids were forced into unnatural positions. The photographer took so long posing them that it was difficult for her to get back to the camera in order to capture the pose as she saw it in her mind. So, it was mostly a lot of posing and chasing the kids back onto the backdrop, and doing this all over again. and again. and again. with 1 pre-teen, 1 3-year-old, 1 almost 2-year-old, and 1 3-month old. 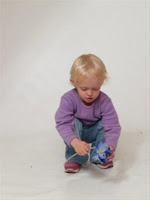 There were photos of Lil and Liam, of Patrick and Rae, of Lil, Liam, Patrick and Rae, and back again. It was grueling. I couldn't take it anymore. We begged her to stop. The kids were tired and had enough. But she wouldn't stop. Until we absolutely insisted. 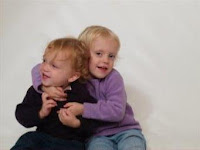 lil in a strangle-hold with a begrudging liam.

Don't get me wrong - I love pictures of my kids strangling each other. It's authentic and wonderful, and reminds me of me and my brother when we were kids. But I can take pictures of my kids strangling each other at home. In fact, I have taken a number of them already. And the lighting is better with less shadows when I do it... 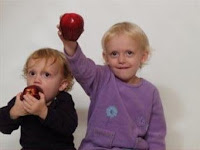 liam eating the prop apple. i had to wipe the dye off his mouth and pull out the top bit he actually bit off...all while the photographer was still snapping photos...
After we escaped the photographer's clutches, we were told we had to come back in 10 minutes. So, Christine lead us on a walk to get pretzels with the kids and back again. We waited...and waited some more...we waited another 20 minutes...

Then, we were told that we would have to come back for another appointment.

But Christine lives out of town and it's not convenient for me to come out to the mall. So, we don't want another appointment. We will just order them online later.

Well, then, forget it. Keep the pictures. They were pretty awful, anyway. We'll just pay the sitting fee and be on our way home now.

They actually continued to argue with us and debate store policies with us. Apparently, they differ across Sears locations - so anything you see on the web site might as well be pretend.

Family photography at its finest.

Next time, naps it is! Sorry Christine! :)

p.s. they later changed their mind about how, when, and where we were 'allowed' to order prints but we decided they weren't worth ordering, anyway.