Day 161. in which the corporate lackeys are lost!

So even though the commute is terrifying, the carpool has become more of a social club. Whoever is driving needs to be kept awake and entertained. Therefore, passengers are under a certain obligation to perform.

The carpool line-up was going to be a bit different this afternoon. Kyrce had rehearsal and wasn't returning to Kingston right after work. So the Intern (she gave me permission to use her name, but I enjoy referring to her as 'the Intern'...) had parked her car in the morning at the Wal-Mart (cringe shudder) in Monroe. She had some trouble getting there, having made a wrong turn along the way. Monroe looked terribly confusing to me. I couldn't imagine driving through there myself, and actually navigating to a 'real' destination seemed impossible to me. I was surprised she found this place at all.

On the way home, the plan was for Kyrce to bring us back to the Intern's car. Kyrce would go one way; the Intern and I would go in another.

It should be no surprise to anyone that I am easily lost. I remember the existence of landmarks, but not the order in which they appear along the way. A landmark, without being marked spatially, is essentially useless. Wayne likes to snigger at me when I exit a conference room.

"Know where you're going?" he chuckles.

Point being, I should never be relied on for leading the way, at least longitudinally-speaking. At best, I can amuse the driver and do my best to perform. I hadn't been paying attention in the least. I admit, this is probably one of my worst habits. I allow others to point me in the right direction. I depend on it a bit. This is probably why Dad doesn't frustrate me in this regard; I totally get it. I recognize the capacity of my memory so that I make a point of recalling what is necessary and let the other drivel out the other side.

The Intern said, "Oh, I forgot to ask Kyrce which way to turn...but I'm pretty sure I know which way I'm going now...That looks like the thruway up there. What do you think?"

So we turned. But since I'm not good at remembering directions, I already can't tell you which way it was. Or what route we ended up on. I think perhaps Rt 6, if there is a Rt 6? Anyway, I saw a thruway but we were passing over it now.

We had made a wrong turn.

But we knew this! Immediately!

We pulled off to a park service road quickly and tried to get turned around but the traffic flow wouldn't slow down and our field of vision was poor because of a bend in the road. So we carried on further to look for another place to turn around.

An hour later, we had no cell service and we were lost in some amazingly large park I never knew existed. I don't know if it was Harriman State Park? It may have been Bear State Park. Signs said there were seven lakes. In fact, that may have even been the name of one of the roads we were on. Once we went in a circle in the park because of a detour. That was fun.

The Intern kept apologizing. I tried to make stupid jokes and tell her dumb stories to keep her from being too upset about being lost. I actually was having a pretty good time riding around in the car. I have always been a fan of rambling car rides to nowhere with friends.

It was also 98 degrees outside and she had air conditioning in the car. I wasn't sure if I wanted to go home to our oven-baked house with sweaty little kids waiting to clamber all over me! I looked at the clock. It didn't seem like it had been such a long time, but it was about 6:30 pm - the time in which I typically get home! And we were lost still!

"Hey! Sloatsburg! I recognize that...hey! that's where I get off when I'm driving on the way in, so I don't kill myself on Rt 17!" I was excited. If we could get to Sloatsburg, then we could get home!
The Intern recognized this meant going somewhat South to go North but our choices were slim to none.

So the Intern drove. and I rode. and there was some more of this. I was worried about the bears now...and the Intern hadn't gotten gas yet!

The Intern called her Dad, but he wasn't so helpful. He just said to turn around and go backwards. I think if he had truly understood how far gone we were, he never would have suggested such a thing! 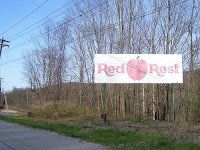 "Hey! I know why this looks familiar!" I shouted. "This is where the Red Apple Rest is!"

The Intern said, "Oh no! I read about that on your blog! That's something bad!"

"No! No! That's good, really! It means, I have a sense of where we are, at least. And if we could get a hold of Kyrce, she would definitely know cause we've gone this way a few times before!"

There was no answer when we called Kyrce.

We passed the Red Apple Rest! It was still there. Just past there, on the left, we stopped for gas. Tammy was going to ask for directions while I called home to explain to Dana why I wasn't going to be home for another hour!

Remember, now, it was 98 degrees out today and on the roof, it's surely far hotter but Dana worked the entire day in it. His boss bribed him, offering him double pay for the day. I think this is unethical, but --- we can pay the bills... Anyway, I wasn't looking forward to telling him that he still had another hour to go with Dad, Lily, and Liam.

I put on my aggravated tone to fend him off from the start.

"Now, before you say anything, I just want you to know that I'm having a really bad time! So don't yell! I've been lost in a state park for the past hour!" I said.

"I guess I should take you off speaker phone? Bob, it's your daughter...she's lost! Where are you?" Dana didn't sound angry at all. I felt relieved for some small miracle.

The Intern came out to the car. She opened the driver's side door and cried, "Tell him I'm sorry!"

This seemed to go over better than the time Kyrce and I missed the exit and Kyrce was laughing in the background while I was calling Dana...

The Intern reiterated to me the directions that the clerk had given her. I paid attention this time.

A couple of turns later, I realized I had been here before. "Hmmm, this looks familiar!"

"Alex! We just went around in a really big circle! Oh my God!"

I couldn't help but laugh. Here we were again, where we had started - Monroe.

"Let this be a lesson to you!" I said, trying to sound serious for the Intern. "Um...life takes you in circles!"

"That's it?" the Intern asked. "You're a philosophy major and that's the best you've got?!"

Next time I visit whatever state park that turns out to be, I hope I get to go swimming. Especially if it's another 98 degree day.

Coincidentally, the Intern got me home alive, and that's what is really important!