July 12, 2008
There wasn't enough time to act; I was paralyzed. Dad rode off into the dark abyss.

Last night, we went to the carnival. Everything about the carnival was quintessentially carnival, even the part where we got ripped off on admission but walked away from the window before we realized this. I'm not particularly a fan of carnivals much anymore. At least, it doesn't bring me the glee it brought to me when I was little. My tastes have become a bit more sophisticated...though, I admit, not much...

But just because carnivals are less fun to me doesn't mean that I don't feel a certain obligation of bringing my children the same amount of glee I had as a child at the carnival. Now the fun of the carnival is witnessing the kids and trying to absorb some of their enthusiasm. 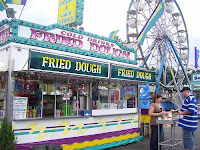 Cotton candy. Fried dough. The merry-go-round. Sausage and peppers. The 'Fun House'. Ah yes! We did it all.

The rides looked a bit suspect. The brought me a high degree of nostalgia, but I wasn't certain I wanted my children riding on them. The Gravitron. The Round Up. These had been favorites of mine, and of Rob's, when we were kids but certainly, we never thought about how safe they were...or weren't...I was glad Lil and Liam were still too young to go on these.

Dana wanted to bring Lil through the Fun House. She loves monsters. She loves to be scared. With Dana by her side, she'd probably enjoy the Fun House. I remember going through with my own Dad as a kid and finding it completely terrifying. It was disappointing to go on as an adult and find out it wasn't all that terrifying, after all. Really, the Fun House at a Summer carnival amounts to riding through on a cart, in the stuffy, oppressive heat without any air flow. Most of the fear factors are long defunct and it's simply dark. So you can't see. And it's hot. And you paid money for this?

But Dana and Lil wanted to go. And so did Dad.

Dad was having a great time. He had already been on the carousel and had told me what a good idea this had been to go to the carnival. Now, I remember as a kid, he was about as into the carnival as I am today. Apparently, it must be a circular trip. Perhaps I'll like it again when I get old. So why not? He could go on with Dana and Lil. I'd stand out front with Liam and watch for them to come out the other side.

Dana and Lil were seated in the first cart. There wasn't enough room for all three of them to sit in one cart but since they were attached, Dad could ride in the cart right behind them.

That was until the carnie started up the Fun House ride. The decrepit, aging carts creaked and the first cart lurched ahead, detaching from the second cart abruptly. The carts were not attached; they had only appeared to be.

Dad stood up all of a sudden, trying to get out of his cart. I was paralyzed. I was too far back from the ride, with Liam in my arms, to do anything.

The carnie looked surprised and went after Dad immediately. He said something but it was indistinguishable.

The last view I had of Dana was a panicked look as he yelled back to the carnie, "He has Alzheimer's!"

Instead of getting Dad off of the ride, Dad was pushed back into his cart by the carnie and off he went into the Fun House.

O.K. Now I was terrified.

Would he stay in the cart? Would he try to get off the tracks? Would he get electrocuted? Was he scared? I could picture us on the 11 pm local news. I think I stopped breathing. I could hear the news anchor asking me, "What were you thinking when you put your poor father into the Fun House by himself?"

Dear God. What the hell was I thinking?

30 seconds of self loathing later, Dad came out the other side, still seated, looking undisturbed.

I began to breathe again.

That was the most terrifying 'Fun House' experience of my entire life. Perhaps it's still effective but not for any of the reasons I remember from when I was a kid!