Day 207. in which Bob is returned to Columbia County.

July 26, 2008
Getting Dad anywhere in the car is not easy. So, I was happy to get an invitation from Aunt Babs to a family gathering in nearby Livingston. It wouldn't be too far - about 40 minutes.

Typically, even 40 minutes would be far for Dad but I thought it'd be worth it for him to be surrounded by all the familiar faces he conjures up so often, especially his brother, Leo. Dad would be comforted by this since he spends much of his time gripped by fear, confused because he doesn't know who people are or where he is. Even though there isn't much left that is tangible to the Columbia County Dad remembers, the desire to get there is as strong as if there was.

Throughout the day as habit, Dad typically seeks "a ride back to Columbia County". So today would be a bit easier than usual to get him into the car. 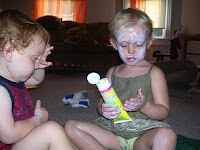 We spent most of the morning getting ready. It takes small milestones throughout the morning to make it to a 1:00 departure time for our group. I was trying to work at the same time. Not an easy thing to do...this is what happens when you try to work with your kids in the house... [Exhibit A]

In between work, I was tossing laundry, wrangling children and redirecting Bob. And I was 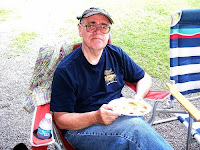