Day 15. in which Seth starts labeling our food supply. 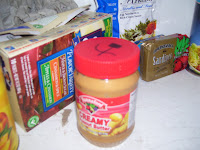 Seth and I met up in the kitchen tonight for an evening snack. We often meet up here after the kids are passed out. I am overwhelmed by the number of people trying to talk to me at the same time in the evening. This tends to happen when everyone is still awake in the house. Kids are tugging at the legs of my pants, Dad is asking me where the bathroom is, and the phone is ringing... My brain shuts down completely when multiple queries are directed to me at once. I become frozen, like a deer in headlights. I am unable to answer anyone's questions! I hear things happening but I can't process them all at once, and Seth is one of the only people who truly recognizes this...and when he witnesses this happening to me, he is kind enough to keep our dialogue for a quieter time...

Seth does not have the best eating habits. (Feel free to try and defend yourself here, Seth!) I think I may have identified the problem. Seth doesn't like to comb his hair - this is one of our only points of contention, which I'm not complaining about because I anticipated many more such points when Seth hit 13! I think Seth doesn't like to comb his hair because his father is a hair stylist. And I think Seth may have become anti-vegetable during his mother's time consuming vegetables solely. This is Seth's version of "acting out" - Seth and I have discussed this, and I suspect this behavior may have started out unconsciously...

This evening, Seth was trying to turn me on to frozen waffles with peanut butter. (Well, I mean you'd toast the waffle, but it starts out as frozen from the freezer- it wasn't a home-made waffle.) Somehow, Seth thought this was somewhat nutritious because of the peanut butter factor. However, the peanut butter we have in the house is not 'pure', and you'll find added sugar as well as corn syrup in the list of the ingredients. Nothing really healthy happening here...although I imagine the protein is still present.

I have to admit...a waffle with psuedo-peanut butter is tasty...but I certainly don't have Seth's metabolism to make this a habit!

Seth really seemed to think this peanut butter was healthy, and felt deceived! So he labeled the peanut butter with a sickle and hammer on top of the lid. It would now be known as Communist Peanut Butter.

This all gets me thinking. Particularly since the FDA just decided that cloned meat was OK to eat! I could go on forever on why this is a bad idea, but I think you'll find there are many web sites that already do this, and likely in a more educated way than I could.

I went to the FDA web site to get a look first-hand at what they are thinking, and I have to tell you, it really didn't fill me full of good feelings about it. Below is a paragraph from the conclusion of their report - I have bolded the text below, which for me, caused me to start:

Food Consumption Risks: Edible products from normal, healthy clones or their progeny do not appear to pose increased food consumption risks relative to comparable products from conventional animals. Confidence in this conclusion is relatively high due to empirical evidence from bovine clones, and the consistency of empirical observations among the other species. Progeny of clones are likely to be as safe to eat as their non-clone counterparts based on underlying biological assumptions, evidence from model systems, and limited, but consistent empirical observations in the species evaluated. Additional data on the health status of progeny, and composition of milk and meat from clones and their progeny would serve to further increase the confidence in these conclusions.

People! Please don't eat this meat! Read the text closely! Additional data could further increase the confidence in these conclusions! Or it could completely void the conclusions! I don't want anything to be 'relative' or 'likely' about it!

Seth initially thought it'd be OK to eat the meat, and he'd give it up if he started to feel badly...but the fact is, we really won't know what the effects of this meat will be...

So, please, don't eat the meat! And please don't feed it to your kids!