Day 4. in which the house is resurrected, Alex conquers health care, and we destroy the KGB and FBI. 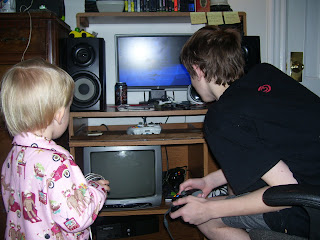 It was quite a day!

Our home truly looked like a storm had blown through it. But really, it was just the typical whirlwind activity of our five-person household simply existing. The nighttime is particularly bad for us. Since we often get home late from work, as Dana did last night after a rather gruesome day on the roof in the frigid cold, we are rushing rushing rushing, and then collapsing. Leaving behind in the dust are our dinner dishes, a diaper left on the floor, dirty laundry that falls where it was removed as Dana and I struggle to just keep everyone entertained and safe from swallowing junk off the carpet.

\I spent the day rushing around the house at manic speed from the moment everyone left the house. I tossed laundry. I washed loads of dirty dishes (our sink being very small). I undecorated the tree, and dragged it outside. I moved things to the attic. I vacuumed and scrubbed. I washed and I organized. I love to organize. Change in the change jar. Buttons in the button jar. Mail in the mail basket. (I oddly find satisfaction in filling up a garbage bag.)

Without stopping, I scheduled appointments, toggling between physician web sites, insurance companies (dental; health; prescription; eye - all of which I have different 'cards' for), and the online phone directory.

Seth failed an eye exam, and I broke my glasses over three months ago (I sat on them). I scheduled these.

I researched dentists. I'm trying to find the most gentle one I can find. You would think dentists would really market this, but they don't seem to market themselves at all. It's weird. I called one that had a nice, friendly web site with thorough discussions about new and emerging dental technology. I called them. They can't see me until July. I asked them if they were that good? The receptionist didn't have a friendly repertoire. But I took it as a good sign they were that busy. Plus it gave me more time to procrastinate about going to the dentist...

I call a new chiropractic doctor I have never seen before. His web site is exactly what I am looking for. Without a web site, I don't know how people are supposed to decide who to go to see, and why. Typically, my experiences picking physicians has been based on either their locale (ease to get to), and how friendly their names sounded. Not exactly a very reliable way of selecting a doctor, and has certainly led me to some interesting - both positive and negative - experiences.

Unlike the receptionist at the dental office, this receptionist was particularly friendly, and asked me if I could come in this afternoon! (I could not - kids, no car.) So, she said, "Well, how about tomorrow morning?" and actually put the doctor on the phone with me!

Now, like I told the doctor, I really am not in any immediate pain. I just wake up chronically at night with numb hands and arms, and it's very uncomfortable. Sometimes, I wake up and can't move my neck. Since it's only once every other month or so, I tend to neglect it. Especially since my life is so problematic in so many other ways!

Regardless, he was very friendly, and I'm glad I called. I hope this turns out well.

I might find another dentist. Or try calling again to get a different, friendlier receptionist, who can at least 'act' like she cares if and when I come into the office...

So, with the house returned to a semi-contained state, and with our calendar full of appointments, there was only one thing left to do: destroy the KGB and the FBI. Seth and I bunkered down in his bedroom after Liam went to sleep to play Alien Hominid on Xbox 360. We actually started out battling in the new Crash Bandicoot game, but it was too much for mind to grasp. There was too much going on, and I am easily confused by video games.

However, I am a master at Alien Hominid! Or, at least, I was last night. I actually beat Seth's score! It seemed kind of weird how this happened, since when our stats appeared at the end of the level, my accuracy percentage was pretty low. I didn't really get it. And a lot of the time I wasn't even sure who I was, because the other difference between my character and Seth's was that Seth's had a feather sticking out of his head. But our color was identical to each other's, as well as the enemy. So, I sometimes thought I was shooting something when in reality, I was dead and no longer on the screen.

The object of the game is that you are an alien, and depending on what level you are at, your sole purpose is to destroy the KGB or the FBI.

The best play strategy is, if you are unsure, just keep jumping around and shooting things up by pushing all the buttons on the controller very rapidly. This seems to work for me, so I'm sticking with it.

Alien Hominid is a pretty neat game. Seth said it actually started out as a flash web-based game, which you can play here. What makes it playable for an old-timer like me is that it's a side-scroller like the games I am used to from my own childhood.

Despite the delivery, I still find it unbelievable that kids can process everything on the screen at one time. I really struggled playing this game. There was so much going on, and in some places, it seemed like it truly was impossible to 'not' die. I seriously think in some places in this game, it almost seems as if it's programmed in a way that you must lose at least one life trying to get through some of the level areas.

I took some screen shots with my camera, but the quality was beyond poor. But I highly recommend this game! The art is great. I'd hang it in my house. I wish that I had drawn these characters. They are terrifically square and boxy.

Best of all, my 13-year-old son actually wants me to hang out in his bedroom and play video games with him, which I find amazing. So, one of my goals for the New Year is to spend more time playing video games with my son. How's that for a New Year's resolution? I am going to play more video games!