Day 27. in which Alex crosses the hall. 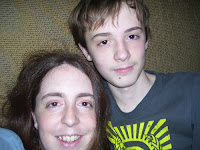 There is a room across the hall from mine that I would like to frequent far more often than I do. However, it's a room full of small chokey things and irresistible gadgets that I could not possibly bring Liam and escape with toddler unharmed. I remember the first time that Lily was allowed entrance to Seth's room for a brief moment. Upon entry, a loud and joyful 'ohhhhh!' came out of her little mouth. Older brothers are so awesome. They have the coolest things.

It's only 7:16 PM, but everyone in the house was exceptionally sleepy so we retired upstairs even earlier than usual tonight. Dad is settled in (a long day he had...) and snoozing in the next room. Liam and Dana are sound asleep, and Lily is lying next to Dana now, mostly asleep but whispering things to herself. Instead of writing in my dark room of slumbering people, I am sitting across the hall in the secret retreat that is Seth's.

Once Seth actually hid me in his room for awhile. The downstairs was just too chaotic and his room was just so much nicer...He locked the door and told me I could stay as long as I needed to. Seth's room is safety! I never thought when I grew up I'd be hiding out in my son's bedroom from the rest of my family.

It's surprisingly soothing in here. There's happy orchestral music in the background of his video game. I'm not sure how to explain it. If you are familiar with video games, it's that stereotypical role playing game music, marked by flutes, that plays in the background.

Ah! A battle scene! The music has sped up dramatically! Ah! An overture! The Drama! Seth appears to be battling a mushroom right now. Apparently, this is a very evil mushroom because of the very dramatic, dark music and the powerful weapons our hero is assaulting him with. This mushroom makes weird chirpy noises and sounds harmless, but apparently, it is not...ah! The mushroom has been slain!

And the music returns to normal. Ah, very mellow.

OK, Seth just told me this story about the name of the game that sounds like a legend to me, but at the same time, it seems plausible and gives credit to the titling schema. He said it was the last game this company that was going under tried to put out, and they didn't really think it was going to go anywhere, which is why it was a fantasy...but then it was successful...so, um, it wasn't final any longer. By that time, the name had become iconic so I guess that's why they stuck with it - marketing.

There's a green light bulb illuminating the room. I'm sitting on a quilt on Seth's bed made by Aunt Cindy. Fuzz, Seth's cat, is quietly grooming herself on the floor, and not at all spastic like she usually is outside of this room. It's cozy here.

I always get lost in role-playing games. There's always a castle, there's always some weird kids roaming around that keep saying the same thing every time you walk up to them, even if you've been playing the game for weeks. I always end up walking in circles. It's no fun. I got pretty far once in the Legend of Zelda a few years ago, but I got stuck in the Dodongo Cave. I could never get past it. I kept getting eaten by the Dodongos.

Ah...we have been found out by Lily. Lily's playing with the 'good' controllers, so I better get her out of the room before Seth's head melts...