Day 24 and ¾. in which Seth publishes his Giant Enemy Crab fighting tutorial. 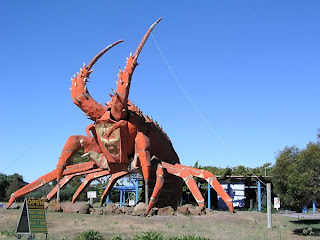 It is true that I aspire to hunt Giant Crabs. Those things have been terrorizing the Earth since
Ancient Japan, and I want to put a stop to it.

You, too, want to hunt Giant Enemy Crabs? Here's a step-by-step tutorial on hunting these elusive creatures...

STEP ONE - FIND THE GIANT ENEMY CRAB
~~~~~~~
GIANT ENEMY CRABS can be found anywhere near a large body of water, and on rare occasions, rivers. Especially the Hudson River, but you got to be careful about hunting them over there, as Giant Enemy Crabs will be significantly larger due to the PCBs in the river.

STEP TWO - FLIP OVER THE GIANT ENEMY CRAB
~~~~~~~
FLIPPING OVER THE Giant Enemy Crab can be one of the most challenging steps to slaying this elusive beast. There is no definite way to flip a Giant Enemy Crab over, but anything from distracting it with food,wedging a hydrolic jack and flipping the monster over, to simply shouting'Roll over, boy, roll over!' and hoping for the best. After this step, the hunt becomes significantly easier.

STEP THREE - ATTACK IT'S WEAK POINT...
~~~~~~~
FOR MASSIVE DAMAGE! From here on, do what ever you want to injure and eventually kill the Giant Enemy Crab. I recommend verbal abuse, extreme use of sarcasm, roundhouse kicking, walking on top of its belly, or whatever you see fit.

STEP FOUR - REJOICE!
~~~~~~~
NOW THAT YOU have annihilated the beast, do whatever you see fit to celebrate this amazing event. You can dance to a very repetitive tune while saying cheesy one-liners, sit down and watch the television, or just go right to sleep. The choice is yours.

I hope this tutorial will assist people in their journeys. Next post, I will be covering how to slay Uber kittens.