Day 61. in which there ain't no sunshine when she's gone.

March 01, 2008
Liam slept in this morning; he didn't wake up until nearly 6:30. By this time, our pillows had been confiscated by the interloping children who were all sleeping horizontally instead of vertically, leaving little room for either Dana or me. I was only half asleep when Liam leaned over and kissed my head. Then he flopped his head back down on the pillow, smiling, his fuzzy hair frizzy from sleep. I was peeking at him, my eyes half open. Perhaps he'd go back to sleep? Liam sat up again and kissed me again with his sloppy drool mouth. Then he flopped back on the pillow again. It was cute.

I heard the hall creek in the way it does when Grandpa Bob is wandering in it. It's funny how when you have lived with someone for awhile, you learn to know the sound their steps make.

Dana and Lily were sound asleep still. Liam was ready to go. I can't think of anything sexier than when someone lets me sleep in...the only thing that comes close is watching men vacuum. That is very sexy...

I scooped up Liam who was beginning to climb on Dana's back.

Dad was waiting for us at the bottom of the stairs. He looked absolutely delighted to see us.

It must be truly frightening to not know where you are or how you got there or how long you had been alone. Unable to differentiate between five minutes and five hours would make me sob. These things I must remember when I'm feeling impatient with Dad's memory.

Dad followed me into the kitchen, always careful to get no further than two feet from me. I started the first pot of coffee of the morning. I don't function well without it. I believe that it jump starts my brain. I think it's good for Dad, too.

Dana and Lily wandered downstairs around 8 with Seth following shortly thereafter. We fed the kids. Most of it ended up as fodder for my Saturday morning project of wiping down cabinets and floors. It's amazing what you will find when you are at the same eye level as a toddler.

Dana shoveled out the car from last night's snow while I wrangled the kids into their clothes. We had a scavenger hunt for clean socks and their shoes. Dad kept coming following me around, helping me search, asking me questions like, "Well, what color is it?" and picking up random things, like a loaf of bread, asking me, "Is this it?"

Liam was gleefully following her. Neither of them were happy when I scooped up Liam off the staircase.

There was more crying.

Dad asked me, "Where do you want me?"

The room with the TV.

Out of the corner of my eye as I'm still rushing around trying to locate Lily's boots, I see Dad sitting at the table in the dining room.

Dana comes back in from outside. Yeah! I can take a quick shower. I spell it out to him so I don't end up with Lily as a companion. Sometimes, I like to shower alone...

I get ready in record time. My idea of styling my hair is brushing out the knots. I throw on whatever can find: a pair of green fatigues, a t-shirt and this ugly sweater Dana gave me. I don't go in so much for style. I really just go for something without baby vomit on it.

15 minutes later, we have all piled into the car to go grocery shopping. This may seem very silly to you that we go through what we go through just so we can all go grocery shopping. It might occur to you that just one of us go to the grocery. Well, there's a couple of reasons. Foremost, it's important to everyone's psychological well-being to leave the house from time to time, particularly in the winter. Secondly, Dana and I both just find it easier to tag team events. It can be daunting to face it alone.

We drive to Hannaford. It's not such a far drive. I've even walked it before.

Sometime between the fruit aisle and the salad dressing, Dana became ill. He had forgotten to eat breakfast and it was nearly noon now - not the best scenario for shopping. He felt dizzy. I sent him to the bagel shop to get something to eat. I was alone now with two toddlers and one Grandpa in tow. I was driving one of those monster carts that resemble race cars. Lily is impatient with me because I actually stop to look at groceries; she just wants to drive.

We eventually catch up with Dana in the macaroni aisle.

Lily decides she wants to get out and walk with Daddy. This isn't as bad as I anticipated when she first started crawling out of the race cart.

$197 bucks later and we have groceries. This equals many bags. So now we have Dad, 2 kids, and at least a dozen bags of groceries to squeeze back into the car. We load back up and head back to the homestead. Seth was waiting outside for us on the porch to help unload all of the groceries. Lily immediately starts pulling things out of the bags as soon as they hit the kitchen.

Sad to admit, but grocery shopping is likely the climax of the day. Certainly, not the most interesting event but probably the one in which we exerted the most amount of effort (next to general child wrangling, of course).

The afternoon passed leisurely. The kids dozed. Seth was in his room, trying to master some game. He came out occasionally for food and drink. I fought with trying to fix the wireless on my work laptop while Dad and Dana sat at the dining room table, eating bologna and being silly. All week, Dad has been singing this song to Andrea, who is one of Dana's sisters and also Dad's caregiver when I'm at work. She's an angel to him - very patient and takes him to Snapper McGee's a lot for Guinness. He's been singing this song a lot all week - at the grocery store, at the dining room table, wandering around the house. He's stuck on this song. 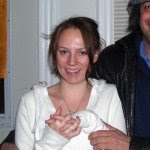 Every time he gets to this part, he is in hysterics and gets stuck on "I know..." Even though Dana had heard this at least a dozen times today, he still laughed with Dad.

I didn't know until I goggled this song that this is really how the song goes. I thought he just didn't know the what came after "I know..."

At least it wasn't the theme song to Dora the Explorer.

Nothing eventful happened today and I like it that way. When I complained about being bored as a kid, Dad always told me to be grateful nothing bad was happening...I think I get the point now.