Day 89. in which we are thankful , but should have listened.

March 29, 2008
A mattress pad doesn't cost much, but I honestly thought for a few minutes after we bought the new mattress whether or not I really needed this. I knew that I did need one, but I tossed it around in my head before I bought one. It's such a boring way to spend money. You can't see it. It doesn't actually do anything. Nothing fun, anyway...I thought of all of the cups of coffee I could buy if I didn't buy the mattress pad.

Last night, something was up with Lil. Even though she's mostly verbal now, she tends to regress in moments of anxiety which makes it even more difficult because she really needs something but you can't quite figure out what that something might be.

This was the case tonight. She was whimpering and whining quite a bit more than usual and I kept reminding her to use words but that wasn't helping. I was desperate to understand her. She kept touching her tongue and poking at her teeth. It was a lot like playing charades. I thought perhaps she was teething? Or maybe she wanted to brush her teeth?

Clearly, something was amiss.

It was likely wishful thinking that made me come up with the 'brushing teeth' scenario. I was thinking this as I watched her running out of our bedroom to the bathroom.

Where she promptly began to vomit.

I know this is gross, but I have to tell you that this is a milestone worth recording in the baby book. Last winter, shortly after Dad came to live with us and Liam was home from the hospital, our entire house was overtaken by a stomach bug of epic proportions. I know I personally have never been so sick as I was then and while we were fortunate that the new baby did not get it, poor Lily did.

And poor Lily was a little over a year at the time, about the age that Liam is now. She could not stop vomiting and unfortunately, she hadn't learned how to vomit 'appropriately'. She wasn't experienced enough with vomiting to know it was coming until it came and she wasn't skilled enough to target anything but the living room floor. Dana and I would swiftly pick her up and try to get to a bag or at least, to the linoleum which could take damage more easily than the beige carpet of our living room.

So, while Dana and I were, of course, very concerned about Lily when she started vomiting tonight into the toilet, we were also overjoyed that she had developed the skills needed to do this!

Dana and I let Lily crawl into bed between the two of us. After a couple of more trips to the bathroom, it seemed like Lily must be empty. We had a few unnecessary trips, too, and she must have brushed her teeth a half dozen times. But at last, she was relatively calm and settled into sleep quickly.

Of course, the night did not end that easily. Ha.

"Lily, you already brushed your teeth a few times now. Just lay down and let's get some sleep," I said stupidly.

She whined a bit more unintelligibly and then she started to pull the covers off of her legs when she promptly vomited all over me and the bed with the brand new bed sheets.

This is the second time in a few days I've been glad to have spent the money on the mattress pad. The first was the time Liam shook his bottle all over the bed, peppering it with dribbles of milk. 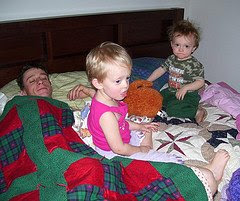 The morning after.
So, my advice to you is spend the extra money and listen when your daughter is whining and pointing to her mouth.