Day 90. in which the Hoe Bowl turns us away.

March 30, 2008
Choosing appropriate activities, given our broad range of household occupants, can be a somewhat arduous task. The activity has to be appealing yet not too high maintenance nor too expensive. Going out to eat as well as going to see a movie is pretty much out due to both the noise and the economic factor.

While Spring is here, at last, it's still a bit too mucky and chilly to drag everyone through. Liam has no concept of avoiding mud and Lily actually targets it. The park is also a bit of a drag for Seth; it doesn't hold the same appeal it once did for him. He is functioning at a higher level than the rest of our family.

Bowling seemed relatively harmless in comparison to some of our other options and it was one we could all participate in. Even Seth likes it! Plus Andrea and Andrew were coming with us, so we had extra hands on deck to help tend to the little people as well as dear old Dad. 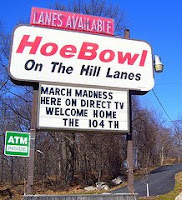 We needed two cars to transport all of us to Hoe Bowl on the Hill. We pulled out of the driveway at the same time as Andrew, but we lost them along the way so we ended up waiting outside for about 15 minutes before they showed. The lot seemed full, but cars seemed to be exiting frequently so we thought we were in good shape. Unfortunately, after we all piled out of the cars and into the bowling alley, we learned they were in the middle of a bowling championship and we wouldn't be able to bowl for another hour.

This might not be a big deal for other families, but our group attention span persists for about an hour, tops, so that wasn't going to work. Trying to explain why we were leaving after we had waited in the parking lot for 20 minutes to Lily was not exactly fun, but she wasn't as bad as I would have expected about it. 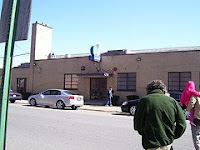 We piled back in the cars with Andrew asking Dana to please not lose him this time and we headed over to the only other bowling alley in Kingston - MidCity Lanes off of Broadway.

Well, we lost them. But they caught up and we headed into the bowling alley.

This bowling alley is not Hoe Bowl. It had a haze of dinge about it. But the kids were excited so we stayed, anyway. There were only 2 lanes left because they, too, were in the midst of a bowling championship. Apparently, Sunday afternoons are a good time for bowling championships. I guess that makes sense? 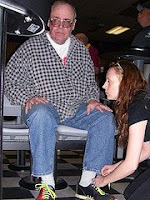 Unfortunately, this is the only photograph I took this afternoon because the management politely informed me that I could not take photographs with a flash. Well, photographs without the flash would be like photographing an empty black room. So, I didn't bother. I didn't quite get it really, but then I realized I was amidst bowling champions. It'd probably screw up their game if I flashed as they were aiming. I don't even know if that statement makes sense, because alas, I am not a bowling champion. I just throw the ball and hope for the best. If someone wanted to take my photograph, it wouldn't do anything. Heck, it might even help.

But by the same token, I could imagine Dana biting my head off if I was taking his picture with a flash while he was playing at a billiards championship. Again, it wouldn't hurt my billiards game, either, to have someone flashing a camera at me.

I like this photograph, even though I'm sure Andrea will hate me for it because her eyes are closed in it. But I told Dad after I took the picture that it would be great to have a picture of a beautiful woman tying his shoes to make him feel better about having his shoes tied. What man wouldn't want that?

Seth, of course, found Andrew and Andrea's team 'cooler' than ours, so he abandoned us.

Our collective brain trust came up with this stellar line up:

Team 2:
Andrew
Andrea
Seth
So our team was riddled with dysfunction. I didn't have a chance!

When it wasn't Dana's turn, I held Liam. When it wasn't my turn, Dana held Liam. When it wasn't my turn or Dana's, it was Dad's turn which meant walking down the step to the where the lanes meet the seats and then making certain he didn't bowl in the neighboring lane. When it wasn't Dana, Dad's or my turn, it was Lil's turn which meant putting your arms behind her and helping her hold up the heavy bowl while at the same time trying to bowl it for her to make it look like she was actually doing it herself while at the same time actually making it the long, slow journey down the lane. Did you get that? Yeah, exactly!

Aha! This is how people work up a sweat bowling! I get it now!