Day 83. in which we celebrate the 1st Annual Brown-Soechting Kite-Flying Day.

March 23, 2008
I'm not Christian and nor was my family growing up, but we always observed Easter. 'Observation' might not be the right word. Really, it served as an excuse to eat a big dinner and celebrate the coming of pastel-colored candy. Being that we didn't go to church on any Sunday, let alone Easter Sunday, I never quite grasped the concept of 'Easter' clothes. Attire on Easter Sunday didn't differ from any other day of the year. It was just one of the days of the year that we ate a whole lot of food. 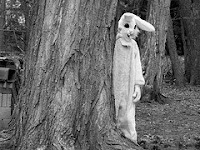 Seth as the Easter Bunny...Easter 2007
Easter, to me, didn't have a 'Christian' meaning. I had no concept of Easter having a meaning at all. This is sad. Even though I'm not a Christian, I think it's important that my children understand that there is meaning behind Easter (and other holidays) so that they aren't equating Easter with Peeps.

Of course, I still want my children to grow up with holidays to which they can look forward to celebrating. Since we have no affiliation with a particular faith, I have decided to dot our calendar with newly invented holidays.

I've actually been creating holidays of my own for about 10 years now. In my early 20's, I announced "The 28 Days of Alexandra" which began on the 1st day of November and ended after a great deal of hoopla on the 28th. This was really no more than a ploy I developed to celebrate my birthday for as long as I could. I am proud to say that this tradition has been maintained for over a decade now.

I prepared Lily the night before by telling her about kite-eating trees. Yet another story I'll regret when a scared Lily wants to climb into bed next to me at night...

"You have to be very careful of kite-eating tress because they are always out to get your kite!"

Dana didn't drive over 30 mph all the way through Kingston to keep Dad calm...even at 30, Dad kept heckling him to slow down. I was seated in the back seat to the right of Lily, who was in the center. Liam was in his car seat to the left of Lily. Seth was still on his tour away from home. As our car pulled into the parking lot, I noticed a kite serendipitously stuck in the top of a tall tree over near the beach.

"Lily! Look!" I pointed up to the weathered kite. "That's a kite-eating tree!"

Her eyes grew as round as saucers.

Dana put the kite together as I followed Liam and Lily around and Grandpa Bob followed me around. The kite was one which Andrea ('Auntie Em') bought in Florida for Lily; it was of a dragon. It's hard to not see monsters and dragons and not think of Lily, oddly enough.

Liam was ready to explore and went running in the direction of the Hudson River. Of course, we weren't that close to the Hudson that there was any chance of one of the children falling into the river, but Lily takes watching Liam rather seriously. She dutifully reports any misdoing of her brother's. (I already feel sorry for him!) Today, she feared for him and was running after him screaming, "Baby! Baby! Come back!...Mommy! Daddy! Come! Quick!"

I rounded Liam back up, herding everyone back in the direction of Dana. The kite was ready to launch. Since there was no wind to speak of, Dana would have to run with it very quickly to get it into flight.

"Daddy! Daddy! Come back! Come back with my kite! Daddy!" Lil didn't

understand what he was trying to do;
she just thought her Dad was trying
to swipe her kite.

There wasn't much kite-flying for Kite-Flying Day.

But I think we'll try this again next year.