Day 96. in which no one wears a wrist-watch anymore.

April 05, 2008
If you can believe it, I'm so white noise dependent that I actually brought a portable fan with me to turn on at night so I could get to sleep. Unfortunately, it isn't the fan I ordinarily use at home so I didn't know until bed time last night that it rattles when it's running. Also, it only had two speeds and even the low seemed high to me. Between the rattling and the high fan speed, it was immediately apparent it wasn't going to help anyone sleep and likely might keep our neighbors awake. 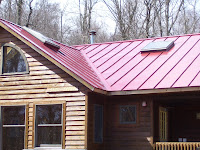 Surprisingly, I fell asleep and slept relatively well. I awoke during the night to the sound of the rain tapping down against the metal pans on the roof. I found it comforting. I am probably much more aware of the metal roofs here than anyone else. I cannot look at them without thinking of Dana. For years, Frost Valley has only meant one thing to me - a faraway place in which Dana works on roofs. In fact, I promised to take lots of photographs of his roofs if he would be so kind to let me go on this retreat.

I was reluctant to get out of bed because no one was demanding my immediate attention. I wanted to soak in the luxury of lazying about and getting out of it when I wanted to - not before!

Neither Kyrce nor I remembered a travel alarm clock, which I was glad about in a way. Since our cell phones were out of service area, we didn't have them to rely on for time either. On a retreat, it seems sacrilegious to be aware of time. In fact, that was the one of the frustrating points about the retreat - that there was an itinerary at all - however, I understood the need of one for logistical reasons.

While we didn't have an alarm clock, both of us did have our laptops. I guess in some ways, it's nothing like camp... So, groggy and with eyes parted in a squint, I opened its lid and turned it on to find out what time it was.

Damn it! I missed the first yoga session!

That's O.K...I'm on a wellness weekend. I am O.K. with missing something. I got into the shower, was happy to find hot water and got ready without anyone tugging at my ankle.

While Kyrce was getting ready, I ambled about outside poking about and taking pictures of my boots. I actually brought real 400 speed black and white film with me! and a 35 mm camera! This dinosaur really mystified Lilith recently who asked to see the picture after I took one of her with it. Wow. Real film. I won't be able to post those pictures likely for a couple of weeks!

After breakfast, another wonderful meal cooked for me and cleaned up after me, Kyrce and I ambled over for the morning ceremony. For some crazy reason, Kyrce had this horrible WHAM! song stuck in her head and she tried to infect me with it by singing aloud! But I was not going to have that stuck in my head all day! My head was going to be clean of songs! But that's just the kind of crap that gets stuck in your head!

The morning healing ceremony was led by Priscilla Bright and would be followed by a session on "Recovering Your Life Force". Unfortunately, before we got to the recovering part, she nearly brought me to tears by playing this incredibly depressing song and I didn't like that.

I wanted the relaxing part of the weekend, not the mucking it up part of the weekend. I wanted recovery without drudging anything up. It bummed me out because I felt like she had gotten me to a good place and then sort of knocked me for a loop. It made me uncomfortable. Maybe I was supposed to feel this way. But I didn't like it!

It actually broke me heart more to look around the room and see a lot of down-trodden, exhausted women. Some of them were far older than Kyrce or I and I couldn't help but wonder what they had seen, what stories they could share. Collectively, we were one large tired group of women.

We had no idea what time it was. You couldn't tell how close you were to a session beginning and a session ending. I hadn't noticed how everyone had become reliant on cell phones as their main source of time. It had escaped my attention that no one wears a wrist-watch anymore. These things escape our notice so subtlety.

After letting out our rage for a good hour through coloring and stomping- recapturing a bit of our inner spirit - Kyrce went to pottery and I went to meditation at the Castle. 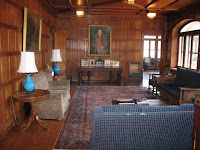 Some of the buildings aren't so close together and since no one has a wrist watch, sessions tend to run over as well as start early. Even though I had gone directly from healing my soul to meditation, I still found I was late. I followed some people up to the Castle and the three of us went around quite a few corridors and around staircases and through unmarked doors before we found the meditation room.


I've never been to a group meditation before. Honestly, it seemed to add something to it. Like collectively, we were more clear than we would have been without each other. During the final meditation, it surprised me to have the sensation of falling out of myself. You know, like when you're in the car and you're drooling on yourself and you feel your neck jerk suddenly as your body relaxes. Only I was very much awake. So it threw me quite a bit. It broke my attention.

And then it was time for lunch. Or so they said. I poked about the Castle for a bit on my own, taking some photographs with my 'film' camera...so I can't share those yet...I like taking pictures of things that will scare me later. I'm not sure why. And this building was old and spooky.

I was late for lunch.

Which made me late leaving for Geyer Hall.

Kyrce had gone a different direction so I had no one to follow but I had a map and I felt confident I could find Geyer alone. After all, I had found the yoga last night in the dark. I was thinking about this and feeling quite relaxed and satisfied - almost triumphant. I was thinking about how I'd tell Wayne (my boss) how I didn't get lost since he pokes fun of me so much for this, how it was really a corporate illness that I wander lost through USR.

Nothing said 'you are here'. 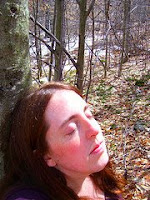 If I made it to Geyer now, I'd be breaking in at a very late stage of meditative quietness. So, frustrated, I decided I would go take a nap and be happy about it. I trekked back to Snow Lodge and played outside for a bit in the sunshine. Then, I crashed completely in my bunk.

I only meant to sleep an hour. I had a 3:45 personal yoga session at Victoria Hall. But I didn't have an alarm. So, when I woke up, I felt a bit panicked because my sleep had been solid. I opened the lid of the laptop and waited impatiently for it to turn on.

And I had to run up hill and over to Victoria Hall.

Kindly, my yoga instructor was waiting for me and even offered to run late to make up our time. Wow. If only real life were like Frost Valley. Everyone was just so nice.

My head and heart feel quiet. I can't stop smiling in this place.

Alas, there was no bonfire tonight. All day long they had me excited about a nonexistent bonfire. It was a fireplace fire. So I sat outside my cabin in the dark playing with my camera some more and taking pictures of what would have been a nice bonfire if I weren't so scared of starting one myself. Actually, I'm not scared of starting one - just that it might get out of control and I'd end up burning down Frost Valley.