Day 110. in which the grill is mis-screwed but the kids are still alive.

April 19, 2008
Success means having a strategy in play at all times.

If I were really good, I would have a better system in play. I actually do have a lot of ideas for systems but I haven't had enough time to put them into play.

Obviously, it's not that I'm totally without personal time. But this very blog itself is a representation of wasted time. I guess that depends on the vantage point which is always changing, anyway. 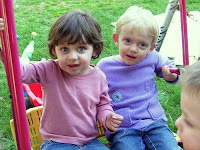 It's tricky to stay on top.

And I'm not trying to stay on top so much as I am trying to survive. Children can be vicious creatures. Don't let their charming smiles delude you.

I haven't found a good way to make others adhere to my strategy. In fact, there are interlopers living amongst us. Surely, this would explain what Dad did with his flashlight. Trolls that work against us by moving things out of its 'home' place. I believe in a place for everything. Every thing has a place. It removes the thinking out of the action so that the thinking can be about something useful instead. Like four dimensionalism or the problems of induction.

Of course, this may seem very silly to others and that may be because these others have superior memories. I have to have this system in place or else I spend at least ten minutes running up and down the stairs in the morning, ranting about how I can't find my brush and interrogating everyone I see.

I am foaming at the mouth by this point and cursing my own existence for not remembering where I last used it.

Recently, I bought a new package of brushes so that in total, I would have a collection of three hair brushes that I could strategically place throughout the house. There would always be a hair brush in reach. I could reclaim the 10 minutes of ranting and replace it with something useful. Fool proof.

I can recall as early back as single digits Dad littering the house with enigmatic notes on 8 1/2 x 11 sheets of white paper. These notes would be lay in a series from his bedroom door all the way to the front door of our house and would generally only contain a few words that were altogether meaningless to anyone outside of the author.
hutte usyck post
7:30
They had meaning to Dad, though. And I would entirely put up with such notes if they could help him now. It's funny how irritating habits in retrospect are missed and even endearing.

Putting together a new grill can be a challenge for anyone, but it should be considered a

So from the moment I got up this morning, there was a strategy about how the morning had to go to optimally make use of our limited time. Who had to shower when and in what order. How should the washing of dishes and tossing the laundry be intermingled? What best time could we make it to Lowe's to get a grill? in between which meals and whose nap time? Such logical contingencies I never imagined in my studies. 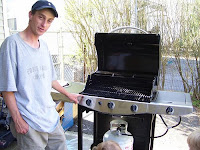 Two trips to Lowe's later, we had a new grill. The first trip had too many of us in the car to fit in a grill. Our strategy was lacking spatial logistics.

Two interlopers later, Dana successfully had the grill assembled. Even if the lower panel is screwed in on the wrong side so that the propane tank is exposed, the kabobs still came out good. Aesthetics isn't everything. More importantly, no children were harmed during the assembly of the new grill. Mission successful. 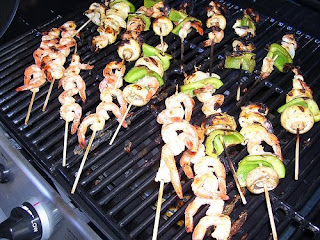