Day 100. in which a soggy Dorito is left behind. 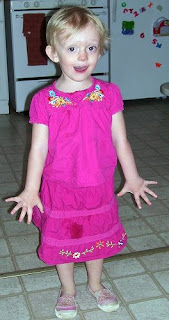 Dana and Lily were watching Shrek for the umpteenth time tonight and munching on some Doritos. I heard them talking on the way up the stairs awhile ago. Lily was trying to convince Dana and Seth that she needed the entire bag of Doritos but Dana managed to placate her by putting a handfull on a paper plate.

The movie ended, teeth were brushed, and Lil was tucked into bed.

But on my bed remained a paper plate with a few Doritos on it.

What the heck. Why not eat one?

In the dark, I put one in my mouth. It was much soggier than I expected it to be...

Lily had apparently licked all of the dorito-cheese off and left the chip behind. It was a bit late by the time I noticed this - it was in my mouth already. So I swallowed it.

Is that disgusting or what?

I wasn't actually that offended until I told Dana what had happened! He said, "What?! You ate it?!"

My advice to you: don't eat food in the dark that your toddler left on the bed.