Day 105. in which there are missing body parts. 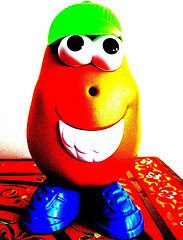 MISSING!
Mr. Potato Head was discovered this afternoon in the Brown-Soechting living room. Visibly frenetic from the recent attack, the victim was found smiling deliriously despite missing several key body parts - most noticeably, his arms, ears and nose. Since his ears are missing, interviewing the subject was impossible. The attack occurred during the light of day in a residential neighborhood and does not appear to be an isolated incident as other victims were discovered near the scene of attack.

Lilith said Liam did it.