Day 111. in which Seth is dragged down the staircase.

April 20, 2008
Lilith always manages to find a reason to get out of bed. Sometimes she simply wants Dana or me to pick her up like a baby and carry her back over to bed. She smiles blissfully as we tuck her in "nice and cozy"...again...

Other nights, it's not so easy. Occasionally, she demands a snack - a bad habit she has picked up from her bad parents. Night time kitchen snacking has really become a nightly social event in our house. Dana, Seth, Lily and I often gather after retiring to bed about a half hour later to get a drink or a snack. Although the gathering part is always fun, it's just not a good idea to snack and then sleep.

Sometimes, Lily feels compelled to get out of bed to brush her teeth again. It's hard to argue with that. I mean, what parent forbids a child from tooth brushing?

Another excuse that a parent shouldn't ignore, even if there is suspicion that the excuse is bogus, is when your child expresses a need to go 'pee-pee'. This was Lily's cry tonight from her bed.

It was my turn to get up with Lil. I sighed and rolled out of bed. Lily jumped out of her bed like a little pixie and came quickly running over to me.

Tonight it was a good thing she got out of bed because if she hadn't, we might not have known about the vicious dragon lurking on our staircase just waiting for the perfect moment to gobble up Seth.

Lily seated herself on the toilet. I sat down on her seated 'training potty', which has only ever been used as a foot stool to the sink and waited for her. She flashed a smile at me, giggling, and said, "I've gotta go poops!"

At that moment, Seth stopped in front of the bathroom door. Lily was still laughing and said again, this time for Seth's benefit, "I've gotta go poops!"

Seth shook his head but couldn't help but smile at his little sister.

Lily thought she was being clever so she continued, "Quiet!...Do you hear it?...It's coming out!" and she burst into more giggles.

I knew we were going to be here a long time. When Lily tells you she has "gotta go poops", you know half of the time she really doesn't...she just thinks she is funny and she knows it makes us laugh - just the way she delivers it. But for the other half of the time, when she actually does have to go - I know I ought to listen!

Things were moving along slowly like this when all of a sudden a dragon suddenly grabbed Seth by the ankles and began to drag him down the staircase! Seth screamed in anguish as the beast, hidden from our vision since it was behind him on the stairs, slowly dragged a fighting Seth down the staircase.

Lily decided she didn't need to go "poops" and watched with alarm as her older brother was dragged down the stairs, crying out for help! Her eyes were wide open as she cried valiantly, "Seth! I'll save you!"

As Seth continued to scream out in agony, Lily looked up at me, hopefully, as she took a step backwards, "Mommy...you go downstairs. Save Seth!"

Seth was out of our vision entirely now. The dragon had dragged him all the way downstairs. It was eerily quiet.

She looked scared. "Pick me up!" she commanded.

So I picked her up when a deep voice from the dark downstairs bellowed up, "Little girl!...LITTLE GIRL!...Go to sleep!"

Lily grit her teeth and her eyes nearly popped out of her head as she began to literally shake and hold onto me tightly.

"Seth, come on up! You're scaring her!" I shouted down below.

Up the stairs walked an unscathed Seth to Lily's visible relief! He was laughing and she was smiling at him.

"Seth tricked us, Lil!" I said, trying to explain to her what had just happened. She seemed confused to see him standing there. "That Seth! He tricked us good! Let's go tell Daddy what he did!" 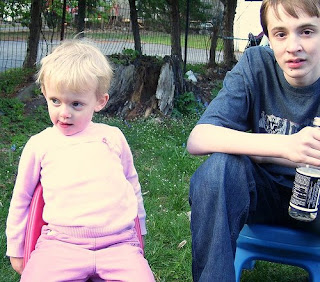