Day 98. in which there is only one bathroom.

April 07, 2008
Sometimes in our house you have an opportunity of using the bathroom alone. Unfortunately, we only have one bathroom so it's often interrupted. When my father moved in with us, he used to make remarks when he couldn't get into the bathroom like, "What do you mean there is only one bathroom?" as if this was completely absurd.

In my childhood, I don't recall many times that we had more than one bathroom in our house. There were two in our raised ranch in Bells Acres, Valatie, but Dad wouldn't let us use the bathroom downstairs. Ever. Apparently, there was something 'wrong' with it. But since Dad never got around to fixing it, I suspect he just didn't want to clean it. I honestly don't know, though.

Dad seemed to implement lots of random rules when I was a kid - but now that I'm an adult, I can appreciate that they weren't as random as they seemed. I wasn't privy to Dad's internal thoughts. We weren't allowed to go on the balcony off the second floor kitchen of the same house because Dad felt it was unstable. However, in retrospect, he probably was more scared we'd do something stupid like fall off the side and end up with a broken arm.

He used to do a "rivet check" on the back of anyone who was wearing blue jeans before he allowed them to sit on our wooden benches on each side of our dining room table. The dark wood was somewhat soft. Though I don't recall the name of the salesman, I remember Dad ranting about the idiot salesman who had stupidly signed the sales receipt on said table, forever leaving his signature imprinted on our dining room table. Worse yet, Dad was always looking at the back of everyone's jeans to make sure their jeans wouldn't scratch the wood...

I implement rules like this with my own kids but mine become more obvious as the children get older. Seth is on to all of them now, I'm afraid. With Seth, I created creatures like "Basement Monkeys" which were very anxious, somewhat vicious monkeys. These monkeys were necessary - as well as eco-friendly - because they heated our home by their busy activity, jumping about, wild monkeys. But you wouldn't want to go down there by yourself...

The best part of having kids is making up stories like this. Kids will believe anything.

Lily thinks we have dragons in the basement. She hollers support for me through the hallway radiator each time I go down to the laundry. Sometimes it's necessary to slay them in order to get back up the stairs. All for the sake of clean laundry.

There was Dad. Waiting. Sitting on the stairs outside the bathroom door.

Dad smiled and started chuckling. He sounded a bit nervous as he asked, "Are we going to sleep here tonight?"

Then he just started laughing. Dad asks me that question over a hundred times a day some days - most days. But as I stood there in my towel with straggly wet hair, running yet without coffee, I'm certain I looked ridiculous and the question seemed utterly untimely.

I love to hear him laugh like that. It's like a glimpse of old Dad before Dad became ill. I found myself chuckling, despite myself. 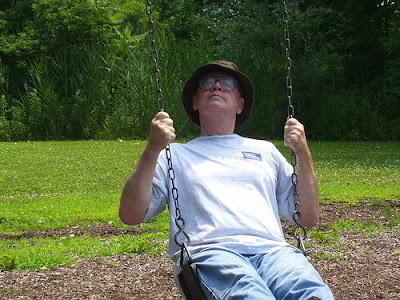