Day 95. in which we try to break white noise dependency.

I have been here about 20 minutes. I love it.

Kyrce’s mum had described it as “magical” and after being here only a few minutes, I know she is right. Some places speak.

I had forgotten what it is to be quiet. I know that sounds silly but I don't often get quiet. Even in the quiet of night, there is a low buzz of white noise filtered in by a fan I run all year long. If it's cold, I deflect it towards the wall. The intent of this fan does not match its purpose. I run the fan to cover the noise of quiet. I awaken at any minute noise or even a change in the room. If the electricity goes out in the middle of the night, I wake from the sudden quiet. I don't like being dependent on white noise for sleep but I confess - I am white noise dependent.

There's a persistent ringing in my ears. I haven't heard it in a long time, but I'm familiar with it. It's horribly irritating. It must always irritate me, only typically, my surroundings are so loud that my brain doesn't perceive the source of irritation. It's this low-grade constant influx of irritation. It's chafing my brain. Perhaps this would explain some of my crankiness lately.

Kyrce is on the bunk across from mine. Being here invokes childhood memories of Girl Scout camp at Camp Little Notch, only the accommodations here are far nicer. After all, there's indoor plumbing here and I don't have any chores assigned to me. I thought it was absurd that my family paid for me to go to Girl Scout camp and I still had to scrub the outdoor latrines.

I wonder which one of us will be the last one to stop talking as we drift off to sleep tonight. Curfew is at 10. That’s fine by me. I plan on retiring early, anyhow. I wonder if they have anyone, like a camp counselor, who comes around and bangs on your cabin door if you’re caught awake giggling past that time. Who would they call to discipline us? Would they threaten to call our parents? 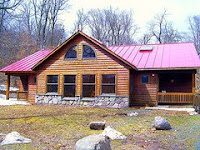 We’re staying in Snow Lodge. No one else has arrived yet. There are three other sleeping quarters in our dwelling. None of them have locks on the doors. This seems a tad unsettling, having grown up with Bob Brown, who was a Nazi about securing our house, but Kyrce assures me that it's OK. Dad used to make the family actually sit in our car outside at night if we had been away all day and were returning after dark. He would do a walk through of the house and flick the lights on and off to hail an 'all safe'. Remind you - this was in rural Kinderhook, New York. Imagine had we lived in a city! Snow is probably one of the best lodges here as far as I'm concerned, even though there are 'nicer' ones, because it's the last one at the end of the road before it turns into woods. I can amble out in my pajamas with relative privacy in the woods. I like poking about in the woods. I've been doing it since I was a kid. There wasn't a whole hell of a lot else to do growing up around Columbia County, New York. I spent most of my day outside at my mother's insistence. I rode my bike and I played in the woods.

I made my bunk up. I like how the economy of how they handle their linens here. It must save them some bucks by not hiring someone to make the bunks up. Plus it adds to that nostalgic camp feel. They just throw a couple of towels and a couple of white bed sheets in a tied up plastic bag on your desk. There’s a folded up blanket on each bottom bunk. I toyed with sleeping on the top bunk. That would have brought me a lot of joy at 8. But now that I’m 33, it seems like a bit of work.

A lot of things change for you at 33. I remember when going away used to mean how much ‘stuff’, or activity, you could fit into a single weekend without making yourself entirely ill. I was glad that Kyrce and I decided to come here and not to Montreal, which probably would have amounted to a weekend of debauchery. At 33, it’s more about how much nothing you can fit into a single weekend. There will be no touching up of makeup, not an inch of fashion, and everyone will be lucky if I comb my hair. After all, why should this weekend be any different than any other day?

In my early 20’s, like most other people in their early 20’s, I likely passed far too much of my time carousing in bars. I lived on State Street in Albany, walking distance to at least a dozen watering holes. QE2, Power Company, Café Hollywood, Lark Tavern, Valentine's…how many clubs could I make it to in one night? What diner would we eat at after the doors were shut at the clubs? What streets would we wander to get home? Would we make it home?

God, and all the work to get ready to go out…that was for the birds.

Now, on any given night, the questions has become ‘how soon will I get to go to sleep’?

Kyrce declared nap time. No argument from me. I laid down on my bunk. I felt relaxed. It was quiet. I didn’t know if I could fall asleep, even though I’m always up for a nap. After a bit of stillness, I realized that a song from Dora the Explorer was looping over and over again in the back of my head.

Come on! Vamonos! Everybody, let’s go! Come on, let’s get to it! I know that we can do it!

I’ve had a eclectic variety of tunes stuck in my head for most of the day.

This morning while riding in the car, I heard this God awful Journey tune - Lovin', Touchin, Squeezing - just horrid - it goes something like "you’re tearing me apart…blah blah...nanananananannana…”

Unfortunately, many of the songs that get stuck in your head are horrible songs.

On the way to get bagels, I heard Touch of Grey by the Grateful Dead. Hadn’t heard that one in years…Cleaned out the Journey. Phew.

Always a song playing in the background of my mind.

By the afternoon, I had this Jethro Tull song stuck in my head earlier in the day. Kyrce and I had been talking about car accidents and getting into car accidents and how you forget stuff after you get into a car accident. Accident amnesia. This led me to this memory of a friend of mine running through to get to the hospital after I was in a car accident on I-87. This was the first time my brother had met him. Rob said he saw this guy running and playing in Rob's car at the time was the Jethro Tull song Living in the Past –


Yeah, probably the only thing worse than having a song stuck in your head is having a song of which you aren't quite certain of the words.

Earlier we had lunch at this little Mexican restaurant in Ellenville where we met up with Kyrce’s mum. Her mum was twice as cute as I imagined in my head. There was a song playing in the background but I couldn’t decipher what it was at first because of other noises in the playground.

What is the meaning of all of this? What could I glean from these songs?

It means I can’t make the noise stop in my head!!!

Dad complained to me on a couple occasions last week that he heard someone calling him. There was no one around at the time actually calling his name. I told him not to listen. But amidst all of the confusion, I could see how it might be difficult for Dad to silence them. It’s a real challenge for me sometimes to block out the peripheral buzz – the static noise of nothing clouding my brain, preventing me from being truly present at any given moment.

The songs in my head are dulling down. Before dinner, I ran through Levon Helm's Ophelia and String Cheese Incident's Sometimes a River

I decided after dinner to go to the evening yoga session. However, it was quite dark outside and I had not thought of the logistics of this earlier enough to process what the walk might be like in the dark, walking from Snow Lodge to Victoria Hall – a place of which I had never been nor had I ever navigated to. Looking at the map of the grounds, it was actually not far at all; it looked like it was only a couple of buildings away. However, there was no direct road. If I wanted to take the road, it would be quite a long walk and that just seemed stupid to me. I didn’t want to go ambling about that far in the dark honestly. Not alone. So, instead, I decided to cut uphill through the trees between Snow and Friendship. Steeply up hill…and it’s wet…and there’s wet leaves…and it’s dark…and I get lost in USR just going to the bathroom…

Well, I had a flashlight with new batteries. That was something.

I had said to so many people jokingly that I wasn’t certain if I was coming back home after this trip, that I might just wonder off into the woods.

Well, this was a joke. And since I know I am navigationally challenged, I told Kyrce as I left our room, “Please…remember how I said I might wander off into the woods and never come back? That was a joke. So, if I don’t come back, please let everyone know that I intended to come back and please come look for me.”

I am happy to relate I was the second one on my yoga mat. I made it on time. I didn’t get lost.

Perhaps this is a sign that I should quit my job. There are times of the year I do not see the light of day. I have worked nearly five years in offices without natural lighting.

The yoga was good. I had forgotten how much I enjoyed it and how good it made me feel. And I even made it back to my cabin. Yoga ran a bit late so I suspect Kyrce was thinking she really might need to send a search party out for me.

Remind to tell you tomorrow about the raisin stashed in my sock.