Day 92. in which we prognosticate. 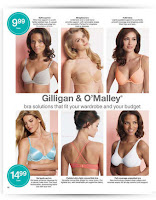 Lilith often struts around our bedroom donning my bra which looks totally ridiculous since the bra itself, laid end to end, is nearly longer than she is...This morning as Dana and I were dressing for work, she was seated on the floor next to our bed with a circular from the Sunday paper. Lil pointed at a woman modeling cotton brassieres in a Target ad.

Liam ambled over to his sister to check out what she was so excited about. She shared the picture with Liam, too.

"Look, buddy! Bra!" Lily said as she pointed to the woman in her bra.

Liam looked excited, too. He reached for the paper saying, "Bra! Bra! Bra!"

Liam has added a new word to his vocabulary this morning: bra.

Seth's was democracy. Yes, democracy. Around the time he was one and a half, every time he would see the United States flag flying, he would point at the flag and say "democracy"! Not flag. Democracy.

One time we passed by a flag pole and Seth excitedly said, "Democracy!...I love democracy!"

The same boy, now 13, asked me last night if he could borrow my copy of The Communist Manifesto...

I hope this doesn't mean that Liam will be asking for a copy of Penthouse at 13...