April 16, 2008
My youngest children will never know what it was like to have to wait for film to be developed before you can actually 'see' the picture you took. Subtlety, technology has creeped up on us; digital photography has nearly replaced film altogether - at least, for a non-professional like me.

I haven't quite given up on my 35 mm completely. Before my trip to Frost Valley, I bought 3 rolls of B/W Kodak film. I only used 1 of them at Frost Valley because I needed the instant gratification of digital. I mean, what if all of my photographs turned out horribly? So, I stupidly ending up taking duplicate shots of nearly everything.Last week, I was taking some shots of the kids in the yard with actual 35 mm film! and after I took Lily's picture, her first statement was, "Let me see it!" It must seem completely bizarre to her that you can't actually see the photograph for a few weeks let alone while you're taking it...

One of my favorite things as a child was to look at the pictures in the photo albums my mother kept. I would ask her endlessly to repeat the same stories behind each picture. It was soothing.

Unfortunately, when my parents initially separated, my dear old mother cut my dear old Dad out of every picture that existed of us together. Later, the photo albums were entirely lost; my younger sister had taken them with her on one of her runs away from home and only God knows where she left them. Someone in the Lake George area may very well be sitting around with photographs of me as a child. Or perhaps they've made their way to a landfill. I don't know, although I prefer the scenario with some stranger sitting around with a photo album of my life, perhaps speculating to who the album belongs or wondering how come it had been abandoned.

I had this crazy roommate (not by choice) once when I first moved to Kingston who was entirely insane. She didn't like me so much and to say I didn't like her would be a total understatement. She used to snatch a lot of things and hide them away in her bedroom. Weird things. Right before I moved out, I couldn't find a photo album containing my pictures of a young Seth. Eventually, the missing album was discovered in her bedroom. I thought it was really weird that anyone would want to steal a photo album of someone else's memories. But you know, she used to stash silverware and plates in her dresser, too, so she wouldn't have to wash them. When the silverware dwindled, you knew where to look. So I didn't take it too personally.

I have always taken a lot of photographs - even before digital - and dutifully documented each one - who it was, what we were doing, when and where it occurred. I have at least a dozen physical non-virtual photo albums now, tucked away in the closet.

To me, photography means capturing something good, something worth remembering. A physical imprint of time. It provides an actual imprint of a moment in time - a moment from yesterday as valid as any moment from today - which we can share with others. It's proof that I was here. Proof that I had a lovable family. Proof of who I am - perhaps for a me that no longer recognizes me - for a day in which I may not be able to remember anymore.

Tonight I walked Lily out on our porch and showed her something called a 'mailbox'. Together we placed a package of film for someone called a 'mailman' to take away and have developed. We put the red flag up on our postal box and said goodbye to our film.

I can't wait to get the pictures back. I hope there's at least one or two good ones in the batch of the 72 moments I captured. 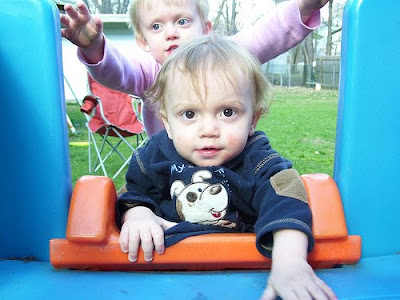