Day 115. in which they made him a bacon cheeseburger. 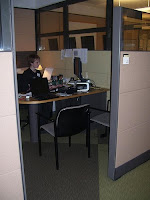 One of the many unfortunate occurrences of growing older is that you lose the enthusiasm for the simple things.

Riding the subway is still an exciting adventure but not for the same reasons you believed as a kid.

You wait for the time of your life in which there is no one to make you go to bed at a certain hour. You're going to stay up all night! You realize as you're working the graveyard shift that staying up all night isn't all it was cracked up to be in your head.

I remember when I was 8, I thought there was nothing better to eat than frozen concentrated orange juice. One of my first chores was to mix the juice and I couldn't help but steal a few bites of the frozen bits. When I grew up, I intended to stockpile my freezer with it and eat nothing else! No one would ever make me eat canned asparagus again. It was going to be all about the concentrate. 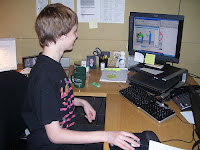 Today was a day both Seth and I have been looking forward to for a long time. Years, in fact. Seth had been asking to attend a "Bring Your Child to Work Day" for a few years now but I had not worked in an office before USR that participated with this event.

I'm certain that Seth believes I have the perfect job, that I just sit around playing on a computer all day long. More so, I'm a bit of an anomaly since two of those days I have the privilege of working from home. Quite often, I roll out of bed, imbibe a great deal of good coffee and stay in my pajamas. It looks much more fun than it is. Of course, it also beats working at a 7-11, or some place where you are uniformed. I try to remember this when I'm at my job and feeling sorry for myself.

However, it was important to me to share with Seth what a day is really like for me. I don't want him to think what I did on the computer was what he was doing on a computer.

Because, frankly, when you think about all of the fun things you can actually do on your computer, can't you imagine how that must seem to someone who only spends time on the computer actually doing these fun things and nothing else? Seth has no true conception of the horror of email. Remember work life before email? Remember when email was just a fun way to communicate? Ha! That changed quickly! Seth frequently gets overwhelmed by his inbox and aborts his email address to escape it. I have no hope of reaching Seth when I email him and I know this. I can't keep up with his email address. But he really doesn't fully comprehend the horror of email. I can't just delete my inbox. I am obligated to answer each one in a timely manner.

Not that email is all I do at work, though it sometimes feels like it is!

So I wanted to engage Seth in a day in the life of Mom - every second of it - including the harrowing, death defying commute... 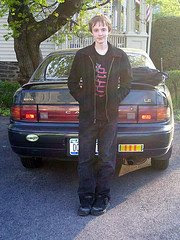 First of all, Seth was unimpressed by the commute. He sat in the back of the car, reading comics, occasionally commenting on how the ride wasn't really that bad...I'd like him to say the same if he was doing the driving! Seth doesn't have the Fear yet; I hope he never does.
As far as I'm concerned, it's a miracle every day I reach USR alive and with all of my limbs properly attached.

Seth was impressed by many things that don't impress me.

"Wow! There's elevators in your building!" he said.

"Wow! I want a cubicle! I want to live in a cubicle!" he said. Seth actually preferred the cubicle-style office to my doorless office. He was not impressed with my space whatsoever. OK, so we agree on some things...I had a door on my office, once, for a brief time. But then Pearson revoked my door privilege when they moved us to the third floor. I hadn't done anything wrong. It was a return to a "Pearson Standard" that was applied to all of us lackeys.

I was in meetings part of the morning so Kyrce entertained him with some neat active figures from the Construction books. The two of them were playing at my desk when I was done with my meeting. This wasn't helping convince Seth that I work at work...

Seth was greatly impressed with the cafeteria in which they made him a bacon cheeseburger and french fries. The cafe also sells this tangerine Izze soda drink he enjoys. What a place!

At lunch, I invited everyone I knew to come and ogle my son. We sat around the table and stared at him, waiting for him to say something entertaining. Seth seemed a bit disconcert. He didn't understand how anything that varies from the norm around here is welcome. 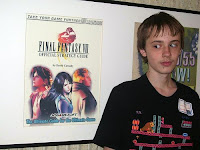 After lunch, I took Seth for a tour of the building. I don't tend to wander around myself too much; I'm generally chained to my desk all day when Seth isn't visiting. When I do meander, I am careful to either follow someone else or carry my cell phone. Six months later and I'm still hopelessly lost in the uniform halls of USR.

On the forth floor, there is a framed poster of a Brady Games strategy guide for Final Fantasy VII. The first time I saw it, I thought of Seth instantly. Seth has a small collection of both strategy guides as well as Final Fantasy games for various consoles. Don't let his grimace in this photograph trick you; he definitely thought his Mom was cool now. But since he's a teenager, he won't allow you to photograph that joy.

When I was 10, my father took me to this swanky restaurant in Albany for my birthday. I remember getting dressed up in this horrid pink dress with grey slash marks that looked like thunder bolts, a string of fake pearls, and clunking around in grey pumps. Egads. It was the 80's...but the point is, I was all dressed up to go to this restaurant with my Dad.

None of them smiled.

I don't recall the dinner many details of the dinner but I do remember the conversation following dinner on the way home in the car with my Dad, more because I heard my father tell so many people this story for so long after it happened than I actually recall the specific moment myself. Driving home, my father asked me, "Well, how was your dinner?"

My father had spent a lot of money on that dinner, trying to do something really special for his daughter. However, he was looking at it from what kind of dinner he would like to be treated to and didn't realize how very simple - as well as cheap - his daughter's desires were.

I'm no longer satisfied with McDonald's. In fact, I think it rather vile though I do sometimes still have a sick compulsion to eat it. I'm no longer happy with a cubicle of my own. I'm not even happy with a doorless office.

God! What I would, could I go back again to such easy contentment! May Seth hold on to this happy simplicity for as long as he can.