Day 36. in which Alex and Kyrce ride together! 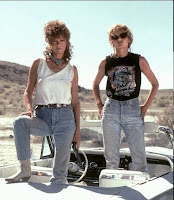 Kyrce and I have a lot in common.

We have the same job, we mutually prefer lounge wear for our attire, and we both love the coffee from Citgo. Similarly, we both share many of the same fears and paranoias of the highway. This makes for an interesting partnership in carpooling. I've noticed others ride with us on occasion, but I see this as an act of desperation. The very first time one of our new production assistants rode in with us was also the last time - at least with me driving. I hadn't eaten all day long because I was too busy so I was shaky on the ride home. I had to pull over and let Kyrce drive the rest of the way. They made me eat a peanut butter and jelly sandwich to up my low sugar. Unfortunately, I missed the point where I needed to merge left and got off at the wrong exit. Kyrce took us for a tour of some back roads after that. It was nearly 7 before we got home that night. And we had left work at 4:30 in the afternoon!

Anyway, this morning while we sat parked at the Citgo, I got out of the car to throw away my Citgo coffee cup I accidentally left in the car from last week. (Particularly bad since I'm always cranking about people doing this in my car...) When I got back in the car, Kyrce was giggling, and she said, "Do you remember when you were in high school, and it was really funny to pretend like you were about to leave your friend and drive off?" She laughed, and said, "I almost did that to you, but then I remembered...noooo, that wasn't funny!"

I recalled riding around in Stephanie's car as a teenager and being thrilled by the power windows. Being a teenager is such an awful time...

Honestly, I prefer windows now that aren't power. Kyrce's car is a perfect example. The car windows won't roll down. Hopefully, it's just a fuse. But the point is just that - there are some situations where you may not be able to roll down the car window, if you have electrical windows.

This includes when you go off the side of a bridge!

Ah, yes! Kyrce and I had found another common fear and paranoia. This could only bring us closer...

Worse yet, despite this fear and paranoia, neither one of us really knew what we should do and in what order should we do them should we go off a bridge.

So I researched this. And this, Kyrce, is for you!
Hopefully, we'll never have to do this. I don't recall passing by any bodies of water on the way to work. But you never know when we'll miss the exit...