February 29, 2008
Dana and I were exhausted by the time we retired upstairs. The day had begun too early and started too late so we were in a state of delirium by the time we hit the bed. I had recorded In Cold Blood on the DVR but couldn't focus on it long enough to understand what was happening even though it took me nearly an hour to determine this. When I watch TV, that is really all I do. I tend to look at it but more often than not, I daydream. What is happening on the TV and what I am daydreaming about become muddled so that sometimes I can't recall the origin of my thoughts. This stimulates some interesting, but seemingly random conversations.

My head ached. I had started to feel ill on the bus ride home from USR which was gruelingly slow. The traffic on a Friday after 5 had come to a crawl. Kyrce and I had gotten the last two seats, but unfortunately not together. It had been such a long day. I didn't even feel like writing, and Dana didn't feel like playing Pool Pro Online on his cell phone - sure signs of exhaustion.

Despite this, I didn't want to go to sleep. As much as I love to sleep, I could never quit this feeling that while I am sleeping, I am missing something. Something interesting, something fun was happening.

But I was too tired to do anything. I had become the cranky child, refusing to nap.

Dana was fading. I was playing with the remote control, propped up on a bunch of pillows, leaning against the wall. The remote control is relatively new. I still am fascinated with it. It's like a new toy to me still. It has a red back light on it which glows when you push the 'light' button.

Functionally speaking, however, it's a pain in the ass. It has too many unnecessary buttons. I can't find the ones I need and I don't know what the other half do. So it entertains me endlessly, trying to figure out which each one does but I never can actually find anything worth watching with it - although I realize the lack of content isn't so much the fault of the remote control...

Oh no. Oh nooooo! Dana? Dana! Dana! I just thought of a name for Lily that I didn't think of before. But I think it really fits!

I love Dana because he responds immediately to my random thoughts as if they were in perfect context with what we are doing. Generally, they do not. But he plays along well.

"Oh no! Really? What is it?" he asked excitedly.

I don't know if I should tell you because if I say it and it's true, then what will we do?

Dana was awake now. "Oh no! We gave her the wrong name! Oh no! Poor Penelope! Poor Penny! What should we do?"

I don't know! Do you like it? Do you like it more than Lily, than Lilith? Can we even admit that we thought this? Why didn't we think of this before? I never thought of a name before that I thought I'd like as much! What should we do?

Should we have it changed?

Wouldn't that confuse her? She's already two! We've been calling her the wrong name for over two years!

I had never had any doubt that Lily was anything but a Lily until this moment. This bothered me, like perhaps I had made some kind of irreversible mistake. Seriously, I don't think children should be legally named until you get to know their personality; they should become their names.

Suddenly, I completely understood how Dana's Mum had named him Dana but yet she always calls him Sam. It seemed so odd because they aren't remotely similar. You can't extract 'Sam' from 'Dana', no matter how you shape it.

I sent myself a text message of the name so I'd remember it in the morning for reconsideration when we were less sleep depraved. I wish I could remember what made me think of the name 'Penelope' tonight. 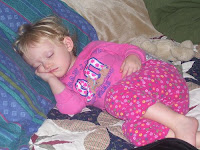