Day 53. in which we are enveloped by snow. 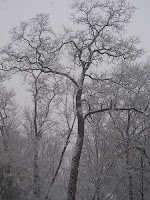 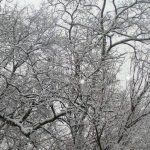 Friday should have been a commute to USR day but when I woke up, it was snowing. The forecast was not good. WDST reported, "Everything is closed." I thought this was a bit extreme but as they ran through the listings, which included several colleges - Dutchess, Ulster, Marist - I knew it was on target and that the commute would be dreadful. Particularly so since Kyrce's car was still bound together by Duct Tape and I had already run through all of my week's coffee allowance.

Working from home has its upsides and downsides. If I didn't work from home two out of five days of the week already, I would feel completely validated calling out on a day like this. Worse yet, half way through the day, the Old Tappan office sent out an email stating that all facilities would be closing early in the afternoon because of the storm. Since I was safely working in my bedroom when I read this email, there was no legitimate reason to stop early.

Dana, Grandpa Bob, Lily and Liam were also all snowed in along with me. Kyrce, too, had safely made it over before it became too messy for walking and bunkered down upstairs with me, away from the rest of my family where we could work, mostly undisturbed. Seth was in Valatie for the weekend and had left the night before the storm. 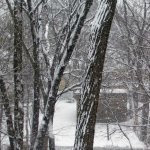 By the afternoon, the sound of stir-crazy toddlers with cabin fever bellowed from downstairs. There was quite a ruckus. I could tell that Dana was being used as a jungle gym and was losing control over Dragon Tamer, Lil, and her sidekick, Liam. I could also occasionally catch a bit of my father grilling him about my whereabouts and Dana's rote response.

As the afternoon progressed and the snowstorm raged on, the antics downstairs seemed to dissolve into crying binges with bouts of intermittent whining.

Secretly, I was glad that the email from Old Tappan didn't apply to me.

Did I really have to stop working and go downstairs at 4:30?

One more downfall to working from home - you go from one tour of duty straight into another without enough downtime to completely morph into the being that is Mom.

It ended up being a relatively quiet night, when all was said and done. The kids were exhausted from Dana-wrangling. I peered out the shades onto Washington Avenue and there was not a car nor a person in sight. I took Liam to the back door to look for squirrels (he goes crazy for that...), but there were none there. We stood in the open doorway looking out the back for a minute watching the snow silently fall into the quietude of night. I felt content knowing that no one would drop by for an unexpected visit. It was still and time for bed. 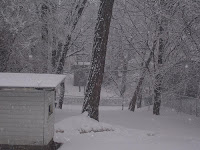