Day 49. in which Seth and Lilith search the moons of Saturn for salted peach dessert.

Every morning before I leave for work and every evening before I go to bed, I pass through the living room and compulsively return the pillows to their proper place, fluffing and adjusting them in such a way that they will appear presentable should anyone stop by, but natural so it doesn't appear like anyone actually did this. (Yes, I know I'm ill...) I'm not certain if anyone realizes this. I suspect my family thinks they just magically replace themselves when they are not looking.

During the night, Grandpa Bob usually rearranges every pillow but never in such a way that is presentable. The pattern will often be facing backwards or they will be stacked upright on top of each other so that one could not actually sit on the couch anymore because the couch has now become a holding spot for the pillows. When Grandpa Bob gets cold, he doesn't often think to look for a sweater. Instead he just puts the pillow from behind him in front of him so that his entire chest is covered by it. 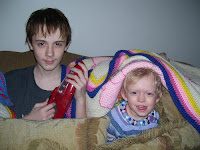 On this night Seth piled up all of the pillows he and Lily could find and draped a couple of blankets around them in tent-fashion. I tried to guess what this blanket/pillow fort signified. Seth explained it was a rocket ship. He and Lily were going to space in search of salted peach dessert.

If you're trying to figure out that last bit there, don't even bother...! In our house, you simply need to shake your head up and down yes and not question when someone mentions something like salted peach dessert.

I asked Lily if she was an astronaut.

I'm not an astronaut!

Lily declared this in the same way she would have declared that she was not a pest.

Oh? Are you an explorer?

Nooooo! I'm not an explorer!

Seth laughed and said, "No, she's a space cadet!"

They were not astronauts. They were not explorers. They were space cadets on their way to the moons of Saturn. They hid under the blankets, peeping out occasionally. Seth wielded Lily's broken toy Dustbuster for protection. Lily navigated the rocket, assuring me not to worry.

I was tired. I had already finished my evening prepping of the pillows.

But watching my older son actually having fun with his space cadet little sister made the disassembling of my tidy couch completely worth it.