Day 50. in which we tape Kyrce's car back together and retire Alex's only pair of shoes.

February 19, 2008
In my bedroom closet, you will find many things - a fishing pole, an old air mattress, a filing box for paperwork, some toys the children snuck in there. There are a plethora of shoe boxes but not one which contains an actual pair of shoes. Instead the shoe boxes are crammed full of mementos, old letters, and other such oddities. There's a crate full of old boots, but all of them belong to Dana.

I never had a passion for shoes. Every once in awhile, I find a pair that I truly love and then I wear them into the ground. In high school, it was my Chuck Taylors. In college, it was a pair of Steve Madden boots I loved so much that I had them resoled. They lasted me nearly a decade. Every other summer, I buy myself a new pair of Tevas. But that's the extent of my shoe love. Imelda Marcos I am not.

It's not that I'm cheap. But I rather spend my fun money on things I truly love. Like coffee. I could buy a new pair of shoes every week if I stopped drinking coffee. But that's just silly.

So the last pair of shoes I bought and kept were from Kohl's. They were a size too small but they were very practical and were on clearance for only 12 bucks. So I bought them and made them fit. After some initial problems breaking them in, they finally melded to my feet in a way that was relatively comfortable. These shoes would 'work'.

After beginning work in USR, I flirted with the idea that perhaps my shoes should look more professional. Perhaps even feminine. The shoes I had been wearing to the Kingston office were truly worn, mostly from my evil cats who like to claw them. I pretended to think that no one would really notice this, but one day my doctor said to me, "What happened to your shoes?!" So, this belief that I needed to upgrade my shoe status persisted long enough for me to go to Kohl's and buy a truly elegant pair of shoes. I surprisingly liked the way they looked. They were a plum-colored plaid pair of heels. If I were to wear heels, this was the pair of heels I would want to wear.

On the first day, I brought the shoe box containing the plum-colored plaid shoes to USR, still wearing my sensible but well-worn pair. I suspected, quite rightly, that I couldn't make an entire day in the new shoes. In my office (the one that had a door...!), I put on my new shoes and walked all the way to Wayne's office. It was a slow walk in which I practically had to hang on to the cabinets that line the corridors. After stumbling back from Wayne's office to my own, I promptly put these beauties back in the box, returning them the very next day.

What had I been thinking? I can't even count the times I've been walking in flat shoes and just tripped over my own feet on the sidewalk. Honestly, I would have killed myself in these things. And it would have taken me twice as long (at least) to get anywhere in them.

Instead of buying another pair of shoes to replace these 'elegant' ones, I kept wearing the old pair. I couldn't find anything I liked enough to buy. I kept putting off the deplorable task of shoe shopping.

This morning I was throwing everything around in the closet, cursing, trying to unbury a pair of shoes that I knew rationally (which I was not at this time) did not exist. But this did not stop my panic as I tried to find a pair of shoes of which I could wear to work. The heel, which had been coming detached from the shoe itself, looked like it was going to fall off completely. I didn't think they were going to make it through the day.

I stumbled over to Kyrce's house in my botched-up shoes, trying to step as carefully as I could and still make good time. Kyrce had been in a minor accident a couple of nights before and we were going to meet a co-worker in New Paltz to ride in with until she had more time to assess how well her car was running.

It was unusually windy this morning. Kyrce noticed something 'off' about the car, but we couldn't determine whether the wind was the sole cause of it. The sound of the wind whipping around the car was difficult to isolate. We hoped to make it to the New Paltz Park and Ride without an incident.

And we did. Unfortunately, Kyrce's coffee from the Citgo didn't fare as well. In the move from car to car, Kyrce accidentally spilled it. A ride to USR is a really long ride without coffee. This was truly a tragic event. But on the upside, Kyrce's car and my shoes were still intact.

It was a long day at work. I didn't leave my desk much because I didn't want my shoes to disintegrate. By the afternoon, I had pretty much abandoned them and hid my feet under my desk. Today I was wearing my bright pink Halloween socks with the black cats and fish bones. While I don't have a passion for shoes, I do have a penchant for unusual socks.

At the end, I limped out to the parking lot. The heel was barely hanging onto my shoe now. We made it back to New Paltz without incident, even a few minutes earlier than usual. I had even caught a nap in the back seat. Dana called my cell as we were pulling out of the parking lot and seemed happy I'd be home a bit early to help him wrangle children.

Since the car was weird in the morning, we decided to take Rt 32 back instead of the thruway. This is fine with me and I actually prefer to go this way, even though it tends to take a few more minutes. It is a slower ride and it makes me nostalgic for the the time I went to school at New Paltz and the rides I used to take with my friend, Brian. Riding with Kyrce always has that 'road trip' sort of feel that riding with Brian did.

The light in New Paltz was out so it took us awhile to get onto Main Street. This was our first delay.

As we got onto Main Street, there was a very sudden horrible noise! Kyrce quickly navigated over a lane and to the shoulder of the road. It was a truly horrific noise! Kyrce thought the tire had blown. I got out and went around the front of the car. Tires were OK. Phew.

But the thick plastic which seemingly exists to protect the car from damage to the undercarriage had fallen down and was scraping against the ground. The plastic area surrounding the bolts had ripped so that the bolts could no longer pin the plastic in place. I managed to shove it back up underneath and I tried unsuccessfully to force it behind another piece of plastic.

I wasn't sure how long this 'fix' was really going to hold. But we weren't in the best place to truly evaluate the situation. Kyrce thought we could make it to Stewart's parking lot where we could better assess the situation.

I had a long coat on so it made sense for me to sprawl out on the pavement to take a closer look at what was going on. Try as I might, there didn't seem anywhere to jam it into place. Kyrce had a brilliant idea: duct tape.

And then you could fix your shoes, too!

Why hadn't I thought of that!? For $2.35 Kyrce had found a perfect solution to keeping us intact long enough to get home. There we were in the parking lot of Stewart's, me stretched out under the car as Kyrce carefully ripped off pieces of duct tape and handed them down to me. Some guy and his girlfriend pulled in next to us to pump up their tires with air. They didn't smile at me as I got up from the ground and brushed off my coat. They looked entirely blank.

Kyrce already knew this was going into my blog. It doesn't get much more absurd than this. Two grown women with somewhat professional jobs stopping for duct tape in order to fix a car and a pair of shoes. Somehow when I'm with Kyrce, I feel like I'm in high school again.

Back in the car, I started taping up my shoes while Kyrce navigated as carefully as she could around pot holes. We hadn't made it far when Dana called my cell phone again. He was worried because time-wise, I should have been home by now.

We're still in New Paltz. Um, yeah, we ran into some problems on the way home and had to stop to tape the car back together.

I'm not sure how much of this Dana got because after I said this, Kyrce and I started laughing. It was much like the time Kyrce and I had missed the Kingston exit and ended up in Saugerties. I think Dana finds our car rides suspect, as if these mishaps must be a deliberate attempt to avoid coming home.

We made it all of the rest of the way home, through Tillson, through Rosendale to Kyrce's driveway without further incident. I got out of the car and started to hobble the rest of the way home. (We live so close together that our back yards are attached.) It was a bit easier now since my heel was securely held on. Had I thought of this hours ago! Kyrce noted that I looked "very punk".

Honestly, in my dress pants and dress coat, with my laptop bag over my shoulder, I knew that I just looked ridiculous. But it was dark and I didn't really care. 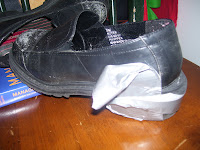 With no plans for a Black Flag reunion, I think it's officially time to retire these shoes.