Day 41. in which Bob recognizes Liam for the first time. 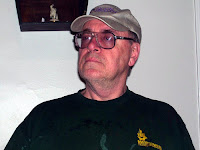 This morning Liam and I let Lily and Dana sleep in...not there is much sleeping in involved in 'sleeping in'... Generally, sleeping in as defined by our household means that you get to sleep until 7 instead of 5:30.
Liam and I came downstairs this morning, where we were greeted with my Dad standing at the bottom of the staircase. Nothing unusual about that. Dad generally ends up sitting in the living room half way through the night. I suspect he leaves his bedroom to go to the bathroom, and just can't find his way back to his bedroom. Anytime he hears someone coming down the staircase, he jumps up from his spot on the couch to see who it is. This used to be unsettling to me when he first moved in with us because I would not be expecting him to be sitting there by himself in the dark. In my half conscious state to fetch a bottle from the fridge, he would often scare the hell out of me by emerging from the living room just as I was passing by.

Of course, this was less unsettling than the time following a newly-born Liam's arrival home from the hospital. Since I was on maternity leave, I felt this would be the best time to acclemate Dad to our household since I would be home full time.

The best time to acclemate Dad, however, was not necessarily the best time to acclemate me to my new addition. Liam and I camped out for the first month or so in the downstairs living room to spare the rest of the family from being kept up all night. After finally rocking Liam back to slumber, I often faced bouts of insomnia, despite my high level of exhaustion. Just as I would drift off to sleep, Dad would often shake me awake in a panic, asking, "Are you alive?"

Yes, Dad, I am alive...but now I am going to strangle you!

It is a challenge to remain patient, particularly when one is confronted with sleep deprivation.

Better yet were the evenings Dad thought we were staying at a Bed and Breakfast, where the IRS was lodging us for a training seminar. (It might help to know here that my father used to be a tax auditor.) He woke me up one night to ask if they had given me a key to my bedroom. Apparently, he couldn't find his. And Dad was delighted to find Raisin Bran in the pantry - this certainly couldn't wait until morning to tell me.

They even have Raisin Bran here!

No one can ever say Bob Brown was difficult to please.

The first couple of months after Liam's birth I had a lot of time to spend with Dad and Liam alone. Lilith was still going to Evie's during the day for childcare, both to keep her on track with a routine and to spare me a bit of anxiety. The downstairs of our house is built in a circular fashion so that all rooms merge together and back again. This probably gives my father the illusion now that we live in a very big house that never ends... But many times, while I was folding laundry or cooking, Dad would occupy Liam by walking him in circles, around and around, in our house.

Liam loved it. One of his first words - and still, one of his only words - was "Grandpa".

What is frustrating, though, is that no matter how many days in a row and hours on end that Dad has carried Liam around, he could never remember who the baby was.

In truth, even now Dad is boggled by who all of these kids are in my house. Just last night, he laughingly accused me of having too many kids - what do have now, anyway? Four?! It's particularly sad because Dad was so excited to have grandchildren. He actually took a copy of my ultrasound, to my embarrassment, to the local diner to show it off when I was pregnant with Lily.

And yet despite all of the time he has spent with Liam, he cannot remember who he is, through no fault of his own. Every time he sees him, Dad asks me, "Whose baby is that?"

This sleepy Sunday morning was different. As I was changing Liam on a blanket on the floor in the living room, Dad asked me simply, "Is that Liam?"

One year and two months after Liam was born, for just a fleeting moment, Dad recognized Liam as Liam. Not as some random child, but as his grandchild. And this remembering is worth remembering.